The Yule Cat: Have A Very Scary Christmas!

It is surprising to realize that not all Christmas stories are warm and
fuzzy with flying reindeer, cute dogs, and cuddly kittens. One ancient
tale from Iceland of the Yule Cat is rather terrifying. It's nowhere near
as innocent as telling kids that if they aren't good then Santa Claus
will leave nothing but coal in their stockings. This cat is a giant
monster that will devour you. 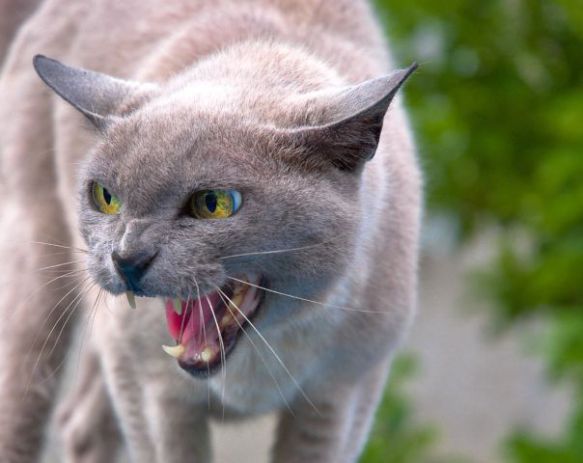 The origins of this tale are lost in the mists of time. The story goes that if you do not have some new piece of clothing to wear by Christmas Eve the Yule Cat will hunt you down and snack on your sorry butt.

It has been surmised that the legend had once been used by farmers to keep their laborers working extra hard to finish the autumn wool processing before Christmas. Those who worked well would receive new clothes from their master, while those who worked poorly did not. This would leave the poor worker all the poorer and under the threat that the Yule Cat would come and devour him or her. 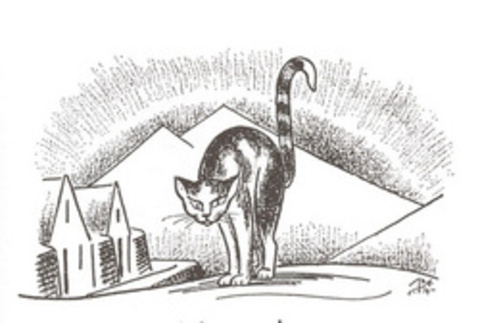 Some say that the legend is more of a cautionary tale to remind those with plenty to help take care of the poor so that death will not stalk them. It seems, though, that the cat should be stalking the farmer for not caring for his workers rather than the workers if this were truly the case. A more benign version of the tale is that the cat will simply eat their food.

This tale was popularized by Icelandic poet Jóhannes úr Kötlum in his poem Jólakötturinn. So you get the idea of the myth of the Yule Cat, here is an English translation by Vignir Jónsson:

You all know the Yule Cat
And that Cat was huge indeed.
People didn't know where he came from
Or where he went.

He opened his glaring eyes wide,
The two of them glowing bright.
It took a really brave man
To look straight into them.

His whiskers, sharp as bristles,
His back arched up high.
And the claws of his hairy paws
Were a terrible sight.

He gave a wave of his strong tail,
He jumped and he clawed and he hissed.
Sometimes up in the valley,
Sometimes down by the shore.

He roamed at large, hungry and evil
In the freezing Yule snow.
In every home
People shuddered at his name.

If one heard a pitiful "meow"
Something evil would happen soon.
Everybody knew he hunted men
But didn't care for mice.

He picked on the very poor
That no new garments got
For Yule - who toiled
And lived in dire need.

From them he took in one fell swoop
Their whole Yule dinner
Always eating it himself
If he possibly could.

Hence it was that the women
At their spinning wheels sat
Spinning a colorful thread
For a frock or a little sock.

Because you mustn't let the Cat
Get hold of the little children.
They had to get something new to wear
From the grownups each year.

And when the lights came on, on Yule Eve
And the Cat peered in,
The little children stood rosy and proud
All dressed up in their new clothes.

For all who got something new to wear
Stayed out of that pussy-cat's grasp
He then gave an awful hiss
But went on his way.

Whether he still exists I do not know.
But his visit would be in vain
If next time everybody
Got something new to wear.

Now you might be thinking of helping
Where help is needed most.
Perhaps you'll find some children
That have nothing at all.

Perhaps searching for those
That live in a lightless world
Will give you a happy day
And a Merry, Merry Yule.

After reading the poem, I am inclined to think that the cat is a metaphor for winter and the fact that the poor have a harder time surviving the bitter cold and snow, and making sure that there is food on the table until spring.

In more recent years the Yule Cat has begun to become more entwined with other characters in Icelandic folklore and there are those who now believe it to be the house cat belonging to giantess Grýla and her sons, the Yule Lads.