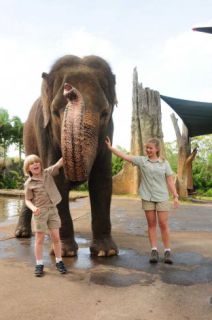 Growing Up Wild, starring Robert and Bindi Irwin: image via mysa.comFreemantle Media, producers of the X Factor, American Idol, and America's Got Talent, among other hit TV shows, says everything's moving to YouTube now. And, not to be late for the party, Freemantle is producing 20 hours of programming on its YouTube channel "The Pet Collective," and that's just for the first three months!  The apparent winner, so far is...

...Growing Up Wild, starring the children of the late adventurer Steve Irwin, Robert Irwin, 8, and Bindi Irwin, 13.  In each episode the children take a walk about their 'yard,' the 1,500 acre Australia Zoo, near Brisbane, visiting exotic animals as if they were living in their own backyard!

Robert wants everyone to learn that "Not all animals actually make good pets.  Be careful what animals you actually choose and always protect animals."

Bindi says she hopes the show generates interest in conservation because "Every time we lose an animal species, it's like losing a brick from the house. Pretty soon, the house just falls over."

Other shows debuted on The Pet Collective include The Litter, narrated by Khloe Kardashian, which follows the lives of a litter of kittens; The Unadoptables, which considers the lives of so-called 'unadoptable' pets, and
Master And Pet, a comedy about a cat who is her mistress's best friend, co-conspirator, and therapist!

Then there's Kitten on a Keyboard, a cat-directed comedy featuring Anime Lillipuss who greets viewers and treats them to all sorts of silly pet stuff; Pet Sense, in which animal communicator Michelle Childerley speaks to American pets and parents to encourage mutual cooperation to get their relationships on track; and David Lehre's Hollywood Animals, in which David Lehre drops in on his celebrity friends to find out about their relationships with their pets.

You can see episodes of these shows now, but there's a lot more to come.  Visit The Pet Collective channel on You Tube.