Don't Mess With Cats; They Pay You Back 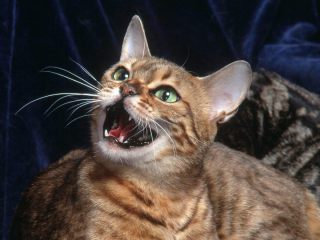 I want my way, dammit! Bring home a new cat, or put yours on a diet, restrict his outings... What will your cat do?

Well, a new study published in the Journal of the American Veterinary Medical Association says cats are quite capable of acting out when you change their routines.

The study, conducted by researchers at the Ohio State University veterinary school, compared a group of healthy cats and a set of cats with feline interstitial cystitis (IC), a disease which causes recurring discomfort or pain in the bladder.  A doctoral candidate, Judi Stella, was working on a project to enhance the activity of the IC cats, upon the theory that a standardized play period, feeding, and cleaning schedule would decrease stress for them.

After a few weeks, she noticed that the IC cats showed fewer symptoms of the disease.  They even started to look better than the healthy cats, sporting thicker coats and clearer eyes.

She then established a similar environment for the healthy cats, so that both groups of cats were in a stable, 'enriched' environment. The cats were observed for 77 weeks.

During this time, however, researchers made occasional changes in the cats' routines for 11 weeks.  They included withdrawing occasional play times, changing feeding schedules, and substitutions among caregivers. What the investigators observed was that the healthy cats showed as many signs of 'sick behaviors' as the IC cats, including refusal to eat, vomiting, and 'going' outside of their litter boxes.  These sickness behaviors increased for older cats in both groups.

The conclusions indicate that changes in a cats routine can result in sick behaviors, even if the cats are not suffering from a disease. So don't mess with them!