You Can't Goat A Bengal Tiger, Particularly When He's Come To Dinner! 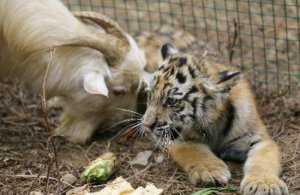 particular feline is a Bengal Tiger cub! Such was the case when a baby tiger named "Bhangaram" was left orphaned, after the mysterious disappearance of his mother.

As the story goes, back in 2009, Bhangaram was rescued from India's Dhaba forest range by the keepers at the Bor Wildlife Sanctuary, located in the Maharashtra region of the country. The plan was to tend to his needs and raise him to adulthood before releasing him back into the jungle. Unfortunately, while you can take the cat out of the wild - apparently - you also run the risk of taking the wild out of the cat. 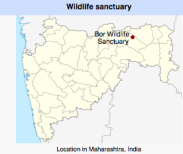 This condition was proven out when the staff at the sanctuary recently released a live goat into the now-full-grown Bhangaram's cage -- to basically serve him up as a meal. It was their way of trying to trigger the tiger's predatory instincts. However, instead of taking a bite first and asking questions later, our now-docile tiger not only rebuffed the cuisine du jour, he actually started to play with his new-found friend.

Whatever your opinions are regarding the staff's culinary decisions, based

on zoological research that demonstrates an unwillingness for a tiger to return to its primal state means Bhangaram may never be able to be reintroduced to his original habitat. And apparently this condition is not an isolated one. Conservationists have learned when young cubs are rescued after the loss of their mother, they most often lack the hunting skills only she can teach them.

While Bhangaram is only one tiger -- by not returning to the wild -- he adds to the dwindling tiger population throughout the world. All tolled, tigers have diminished by 96.8 percent (near extinction) over the last two decades from poaching and habitat loss.

Since the early 1970s, the Indian government has established wildlife sanctuaries and rehabilitation centers in hopes of preserving Bengal tigers like Bhangaram. But in most instances, they aren't of the inclination to keep them long-term.

So what's poor Bhangaram to do? If eating a goat is not an option, perhaps the Bor Wildlife folk need to rethink allowing him to live out his life at the sanctuary. I'm sure the 'kid' he now calls friend would be most pleased to hang out with a not-so-hungry tiger for the rest of his days! After all, isn't that what friends are for? 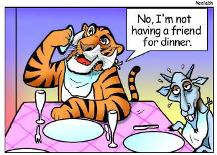 Feed The Birds With A Sense Of Humor