Worms Of The Not-So-Living Dead

Zombie worms are a relatively new species. All right, they've probably
been around for millions of years, but we have only known about them
since 2002 when a researcher from the Monterey Bay Aquarium Research 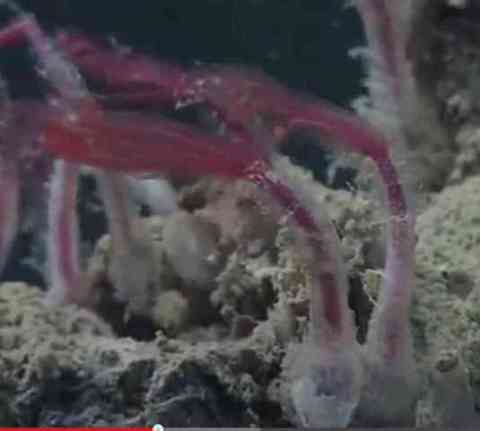 Zombie Worms (You Tube Image)Institute discovered them attached to the skeletal spine of a dead
whale. It would be easy to miss them since they look more like a tiny plant
growing on the remains, however they are apparently an important part of
the ocean's ecology.

The name of the genus is Osedax which means bone-eating in Latin. Of the known species of zombie worms in this genus, almost all live solely in Monterey Bay. Two additional species have been discovered -- one in Japan and one in Sweden. The other 12 species are all found in this one bay off the coast of California .There are most likely more Osedax species out there, they just haven't been discovered yet.

There is still some controversy in the scientific world about exactly what role these creatures play, but humans still have a great deal to learn about them. What has been learned so far is that they feed off of the bones of large marine animals after they die. 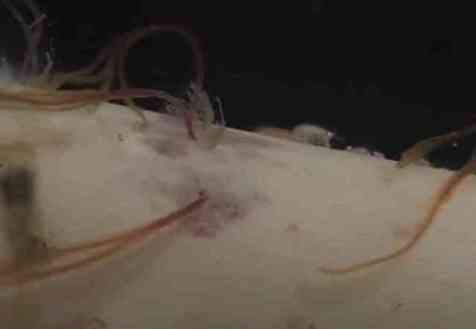 Zombie Worms (You Tube Image)When a large animal like a whale dies the carcass is first cleaned by a variety of scavengers such as shrimp, crabs, and octopus. Once the bones are laid bare the zombie worms show up and start doing their part to clean up the remains.

The worms are not like what we usually think of when we are talking worms. These worms don't have mouths. For that matter they don't have stomachs either. When they attach themselves to the bone they send tiny root-like structures deep into the bone to feed off the marrow, fat, and other nutrients. Symbiotic bacteria helps breakdown the oils and proteins for the use of the worms instead of a digestive system. It is believed that this is at least a part of the process is breaking down the animal remains that cannot be handled by the scavengers.

The waving plumes of the creatures act as gills to collect oxygen from the water, much like the tube worms that live around hydrothermal vents in the ocean. DNA testing has shown that the two worms are related.

Perhaps one of the strangest things about these strange creatures is their method of reproduction. The visible worm is female and she is sheathed in a transparent gelatinous tube. The male zombie worms remain in a dwarf stage and live inside of the lumen of this tube. Each female can be host to 30-100 males, each measuring only about one millimeter. This also means that the females are in a continuous state of reproduction.

The life-cycle of the zombie worm ends when the bones are stripped of all of their food value. The worms disperse one last group of eggs or larvae and then die.

The zombie worms have even made it into American popular culture in an episode of the television series "Bones." In the episode a body was brought up from the ocean covered in a strange pink growth. The explanation was that it was a species of zombie worm known colloquially as the bone-eating snot flower.

Creatures
News Stories
Weird, Odd or Bizarre
Wildlife
Hibernate In Winter, Estivate In Summer: Which Animals Do What?