World Leaders Sharing Koalty Time Down Under At G20 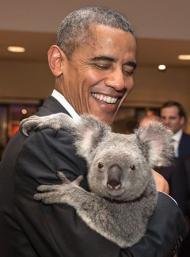 In the midst all those news stories of blank stares and the resurrection of Cold War tensions between certain world leaders (not naming any names, Obama & Putin), Australians appear to know how to cut through the ice to warm up a party. At the G20 in Brisbane, the country’s Prime Minister and the summit’s host Tony Abbott generated some first hand excitement with his koala diplomacy.

Social media was all abuzz on November 15 with a good number of photos taken including those with Abbott, Barack Obama and Russian Prime Minister Vladimir Putin (who is no stranger to the love of animals) snuggling up to the world’s cutest koalas. When one of the furry and sizable critters sunk his claws into Putin’s suit, the Australian PM noted that the Russian leader felt “quite soft and fuzzy inside himself.” 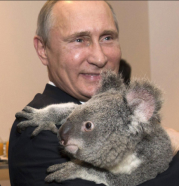 Vladimir Putin & koalaWhile their husbands conferenced, the spouses of many of the world leaders visited the Lone Pine Koala Sanctuary in Brisbane. Abbott's wife Margie Abbott led a handful of the wives through the wildlife sanctuary where they were also treated to the ultimate Aussie experience - koala cuddling.

Koala bears, which sleep up to 20 hours a day and feed on a diet of special eucalyptus leaves, are notoriously capricious. Hence, one report noted that park officials had been training the animals how to behave in advance of the high-status visit.

Lone Pine Koala Sanctuary, founded in 1927, is home to more than 130 koalas and a wide variety of native animals. Koalas, which are not actually bears but rather marsupials that carry their young in a pouch, are an iconic symbol of Australia.

As an Australian, I am proud of the fact that we are hosting the G20 and I'm proud that today we can share the 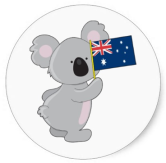 "Koalas population is dropping. We want to share that with the global community, that more help is required to make sure that people and koalas live together for another 200 years here in Australia,” added Mucci. Koala diplomacy definitely was the right activity to move that initiative a long!