Must say. . . professional futbol players have an age-old tradition of conducting themselves in a very 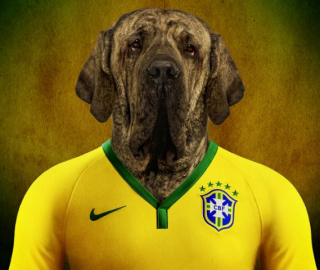 Brazilian Mastiffgentleman-like fashion. As evidenced at this year's World Cup in Brazil, if one player trips or elbows another and causes him to take a fall, you'll often see them helping their opponents back onto their feet, or rubbing their head, or apologizing by offering a handshake. This gamesmanship is definitely not the dog-eat-dog competitiv

e behavior we often find in American football or hockey.

With that said, however -- Belgian photographer Eric Isselee thought it might be interesting to replace these world-class players with what he's imagine to be their canine counterparts. On his "Life on White Creative" website, he's actually suited up 17 dogs in jerseys representing a little more than half of the nations vying for this year's winning title.

When interviewed by the Daily Star UK about the project, Isselee said, “all the breeds are iconic of each country, for example the Bulldog for England and the Alsatian for Germany. Some were very easy to match, others were a little bit less well known.” Since he has been photographing dogs for the past 10 years he had nearly all the breeds on file, having to only take pictures of the few he was missing. 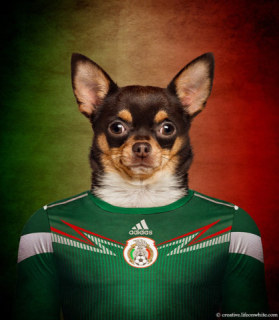 The American Staffordshire Terrier from the United States: 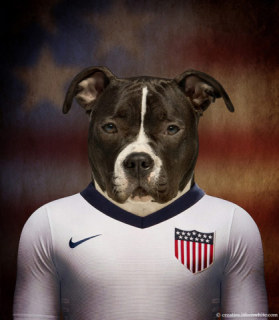 The Portuguese Water Dog from Portugal (President Obama might be conflicted to root for this dog vs. the Terrier?) 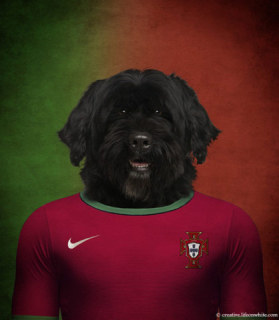 The Dalmation from Croatia: 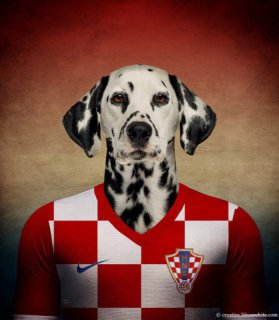 As far as who I'm rooting for, I'm hoping the United States men's national team continues to show the stamina

World Cup 2014 Has Gone To The Dogs! and strength that the American Staffordshire Terrier is known for. They've already beat Ghana 2-1 in the first match-up, hopefully this "Terrier" of a team will take it all way to bring that coveted Cup home to the States. Dog-gone-it, now that would be something to howl about!