Wild Hogs Take To The Highway

In Texas dealing with feral hogs is a losing battle in more ways than one. They can tear up grasslands and farm crops in the blink of an eye, and are now posing a serious threat to motorists along a new stretch of State Highway 130 where the legal speed is 85 MPH. 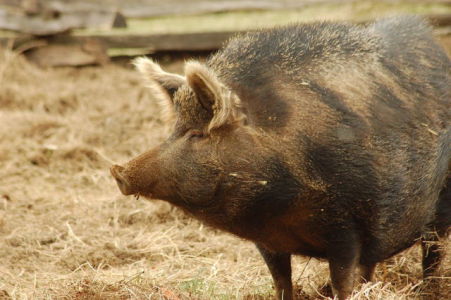 The first collisions with the state's estimated 2.5 million feral hog population began before the highway was even open for business while workers were testing the road. Four accidents happened during construction at the comparatively low-speed of 45 MPH. Since the road opened there have been at least four additional accidents with cars. Because the animals can weigh up to 400 pounds, these are not little fender benders and leave more than a furry spot on the pavement,

Feral hogs are a combination of domesticated pigs that have escaped into the wild and mated with Eurasian boars that were brought into the area for hunting.  This resulting species is highly adaptable and largely nocturnal. The animals cause millions in damage to farms and disrupt wildlife. In spite of a bounty on the hogs and a recent change in Texas law to allow hunting them with helicopters, the population is still growing by an estimated 20% per year.

Mitigating the threat of the hogs along the highway will probably require a joint effort between the state, toll-road officials, and neighboring property owners to trap the swine and build stronger fences or other barriers to impede their movements.

In the meantime the operators of the highway have taken steps to erect wildlife crossing signs along the road to warn motorists of the danger.

Some people are really making a meal of the issue -- literally. The hogs are edible and reportedly delicious.  Hunters can have them butchered into hams, steaks, roasts, and sausage.

Clinton Calls For Tougher Fight Against Poaching
It's Not Just The Birds And The Bees: Insects Are Even More Endangered!
Shark Fin Cargo Banned By China's Largest Airline
Comments