The cat who became an Internet sensation overnight is not a cat at all.  Less than 1 year-old, Grumpy Cat is really still a kitten about to celebrate her 1st birthday on April 4, 2012. Perhaps one of the reasons she appears so grumpy - too much attention too soon? Another might be because her real name is "Tarder Sauce." So, how would you like it if people called you "grumpy" all day long.

After her photo debuted on Reddit, September 22, 2012, it was originally thought that her image was a contrived photo-shop attempt at catching some buzz. So brother and sister co-owners, Tabatha and Bryan Bundesen followed up with a YouTube upload to prove that like Lady Gaga's pop hit, "she was (actually) born this way." And with over 7 million views to date, it's fairly apparent that most folks at this point in time have bought into that notion.

Perhaps part of Grumpy Cat's issues are psychological. As a mixed-breed of Persian, Ragdoll and Snowshoe, it could be she's suffering from multiple-personality disorder. And then there's the fact that her mom is a calico domestic short hair and her father with grey and white stripes might just be making poor little "Tards" (as she's affectionately known) feel like she just doesn't fit in.

However according to her veterinarian, she does get a clean bill of health. Her petite size and famous face is likely due to a condition called feline dwarfism -- ah, so there's the connection with the Walt Disney dwarf in Snow White of the same name!

Here one of Tards' posters also paying homage to her namesake. 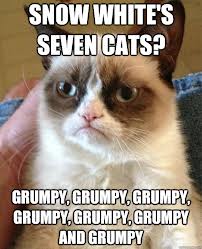 The fact that Grumpy Cat has become a "brand" onto herself may also have become troublesome for the feline. At the recent SXSW in Austin aside from causing a paparazzi frenzy, Tards was actually put to work filming a commercial for Friskies -- now, her official sponsor.

Making a surprise appearance on the fictional game show, "Will Kitty Play With It," 'Fidget' the cat is put to the test in a stare-down contest with Grumpy. Will Fidget try to play with Grumpy Cat? Or will Grumpy Cat's cool demeanor and blatant non-interest send her running for the hills?

So a "star is born!" But with money rolling in, one has to question if Tards even sees a dime of it. Her masters have taken the reigns here to protect the intellectual property rights associated with their new-found cash-cow, errhh cat!

They have filed for a U.S. trademark which covers the name "Grumpy Cat" and her image, in addition to such items as mobile phone cases, videos, greeting cards, coffee mugs and T-shirts.

The trademark application was filed in January 2013 by trademark attorney Kia Kamran on behalf of Grumpy Cat Incorporated of Ohio, a company set up by the owners. According to Paid Content,  ”Kamran, who also represents Mike Tyson, says he hasn’t filed any Grumpy Cat lawsuits yet, but probably will soon in response to the "current wave of infringers that are popping up."  He adds that, "while he’s sensitive to the cultural dimensions of internet memes, he’s had to take action on behalf of other clients, Nyan Cat and Keyboard Cat.”

So with all this new-found responsibility, is it any wonder that this poor little kitten has a frown on her face. Oh yeah, and then there's that sexist remark she had to endure from Vampire Diaries' Ian Somerhalder who when interviewed at SXSW called the little tyke, a "panty dropper!" Well, maybe that should have actually put a smile on her face - but too late now, Grumpy Cat has already been type-cast!!! 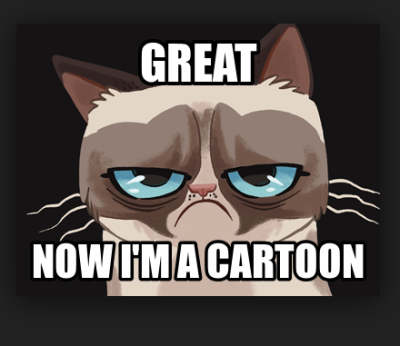