Something that has the impossibility of ever happening is often derided with an adynaton: "yeah, when pigs fly." This figure of speech is often used for humorous effect, to scoff at over-ambition. The etymological origins some say date as far back as Lewis Carroll's "Alice's Adventures in Wonderland," when the Duchess told Alice she had just as much right to think "as pigs have to fly." 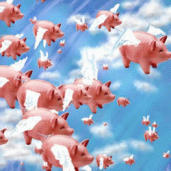 However oddly enough, the odds shifted in favor of pigs taking to the friendly skies back in 2009, when PetAirways announced their transcontinental flights from New York to LA. In my post, titled "Swine Flu App Can Detect When Pigs Fly?" I conjectured that since pigs had become acceptable household pets, that perhaps their owners might consider booking them passage on the airline, if for no other reason that to finally quash the misnomer that "pigs can't fly."

However, with pigs finally becoming airborne, a void had been created. There was now a need for a substitute animal species to represent the hyperbole of impossibility. After all, if we were to find out that "hell actually could freeze over," wouldn't we want to look for another outlandish locale to take its place?

My choice - you guessed it - of course - turtles!

If ever there was a more land-locked species than pigs - it was turtles. I mean they carry their own homes on their backs for God's sake. And when's the last time you saw a house fly? - albeit Dorothy's fictional visit to Oz.

So turtles it was! I was sure I could make this new meme stick with the goal of achieving wide acceptance. After all I have over 40K followers on Twitter and another 6K between Facebook and LinkedIn - so from where I sat, the possibility of my new catch-phrase going viral was in my grasp. Or so I thought!

Concurrently, as I was cooking up this ruse, the most unlikely news broke. In Canyon Lake, a private gated community located equidistant between Los Angeles and San Diego, their local newspaper called the Friday Flyer issued the following report: Flying Turtle sighting expected this Sunday.

Bert BarbayBert Barbay, the paper's volunteer photographer asserted he photographed this Flying Turtle as it splashed out of the Lake on Sunday, March 18 and again a week later on March 25.  And based on this pattern of activity, he concluded that Flying Turtles favored "Sunday" appearances - and predicted for those that missed it earlier, they could most likely catch another sighting on April 1. "With a wingspan of approximately 4 ft, it is an amazing sight" to behold," noted Barbay. 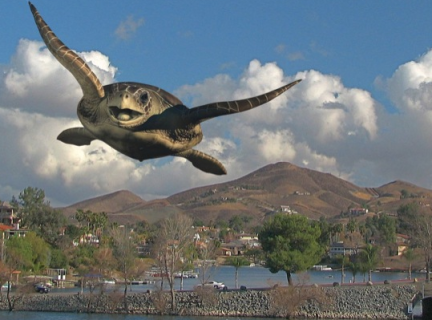 Flying Turtle photo from the "Friday Flyer"
And even though this photo appears "photo-shopped," the article lent credibility to Barbay's claims by indicating Dr. Vick Knight was previously aware of the existence of Flying Turtles, and their original origins of Antartica. Known to Canyon Lakers as "The Turtle Man," Knight stated that the "cold Antarctic winters" force this unique species of turtle "to adapt by gaining the ability to fly."

The post went on to state that Ken Cable, renowned author and wildlife columnist for The Friday Flyer, affirms that these Flying Turtles are reptiles of the order Fúlÿnu ("the crown group of the superorder Poisson d'Avril" according to Barbay).

This news was very disturbing and undermined my supposition that turtles could actually replace aeronautic pigs. To dig deeper, I sought out the newspaper's editor, Sharon Rice. As a 23-year resident of the community, I needed her perspective.

As I drilled down for more facts in the case, Rice was quick to put the story straight, for anyone else who was as naive as myself. "I'm sorry to say we did actually fool a few people with the story," she confessed. And even though the story ran as legit, "there was a clue in the article" that pointed to it's true intent. Of course-- "Poisson d'Avril" is the French term for April Fool's Day.

So when I asked if the entire population of 10,647 was as fooled as I was? "Well," noted Rice, "I was out of town that weekend so I don't know if anyone actually showed up at the causeway to see the turtle. Bert Barbay, the volunteer photographer who conceived the prank told me there was a crowd, but I'll never believe him again."

So comforted in the thought that I could resume my campaign to replace pigs with turtles, I will continue with my quest -- unless anyone else out there can lay claim to actually seeing turtles fly?