When Predators Threaten, Great Tits Do A Tit-For-Tat 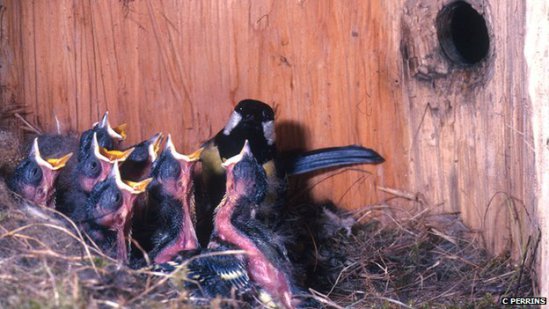 Great Tits in nest of tree trunk: image via bbc.co.uk

Researchers questioned why certain birds who nested in the same spot, or nearby, year after year had more numerous live chicks than some other birds.  When they observed the habits of the Great Tit, they found that in response to distress calls from their neighbors, the Great Tits joined mobs of other neighborhood birds to attack the predator.

Ada Graowska-Zhang, who led the study, said that the mobbing only occurred in situations where the specific birds nested near each other for at least the previous year. And she did not think that they helped each other survive out of selflessness.

Chances are that they think "My nest could be next," Ms. Graowska-Zhang said.  "Or they join because their neighbors have joined their mobs before, and they know if they don't reciprocate, they'll be left alone next time.  It's sort of a great tit-for-tat."

Kids And The Zoo -- The Animal Video Of The Day!!!