When Snakes, Owls, Frogs & A Parrot Were Human [Video]

Sometimes in life, you have to look very closely at images as they are not always what they seem. Such is the case with several 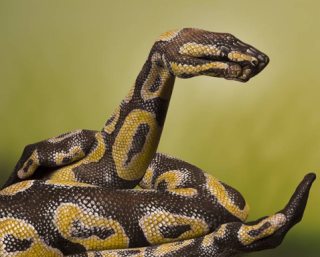 artists who has devoted their life's work to utilizing the human body as their canvas.

Turning the human body into dynamic images has grown rapidly in popularity over the past 20 years. Contrary to their title, body painters don't actually use paint in their work -- but instead -- high grade makeup. Like any other medium, themes run the gambit from having their subjects blend into a scene in nature to musical instruments to even abstract art.

Some artists turn their subjects into chameleons, while others transform them into free standing sculptures. Competitions and festivals take place worldwide that acknowledge body painters at all levels and ability.

Johannes StötterFine art painter Johannes Stötter could be considered the Michelangelo of body painting. The 35-yr old from Italy started working in this field in 2000 and twelve years later was hailed as the Body Painting Champion of the World. As a dedicated artisan, Stötter's work plays tricks with the mind when he hides his human subjects within his art. Some of his extraordinary masterpieces might take up to five months to conceive, create and execute. When ready, models are hired and it takes another 8 hours to paint them to represent animals, fruit or fauna found in the wild. 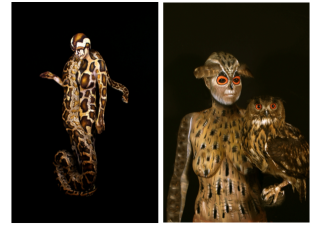 In the case of the tropical tree frog, Stötter used five people to recreate this lifelike creature. Look closely and suddenly you will become aware of where they are positioned. One person can be seen in the centre, acting as the frog's backbone, while two others can be seen crouched on the floor, blending in as the frog's back legs. Two others are are situated upright on both sides of the 'backbone' with their arms and hands strategically placed to replicate the front legs. 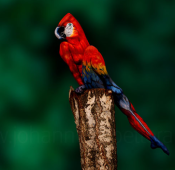 When it comes to this parrot, one has to look really hard to detect the female who's embedded into the work --  posing with one arm wrapped over her head. It took hours to position the model just right on a tree trunk to take this now iconic photo. 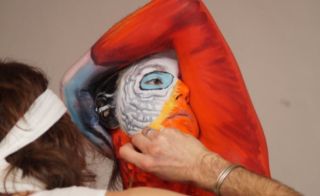 If you're interested in becoming the first in your neighborhood to own a Stötter, his work ranges in price based on size and are now available as posters, postcards, photos or prints on canvas here, or by email: johannesstoetter@yahoo.de 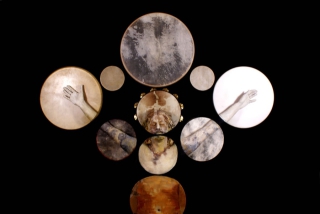