Not exactly carrying the weight of a "Frankenstorm," which epitomized the length and breadth of Hurricane Sandy hitting our NE shores back in October, the name "Nemo" seems like a less likely choice for a threatening winter storm. So who was responsible for hanging that moniker and why?

No, it's not the National Weather Service, which is an arm of the federal National Oceanic Atmospheric Administration who IS in charge of officially naming tropical storms, which retain their names if the systems converts into full-fledged hurricanes. But they were the obvious choice.

No, it's indeed the Weather Channel who last November took it upon themselves to be the bestower of all new

names of winter storms. Brian Stelter of the NY Times, noted in his report, that, "yes, the Weather Channel’s new names for winter storms are catching on, much to the chagrin of the National Weather Service, which has advised its forecasters not to follow the channel’s lead.

But why "Nemo?" It brings to mind the handicapped but cute orange tropical clownfish in the Disney/Pixar animated film, "Finding Nemo." When asked, the Weather Channel indicated it's based more on protocol than it is the storm's weight or severity.  The winter storm names were all announced by the network last fall and are assigned in alphabetical order. 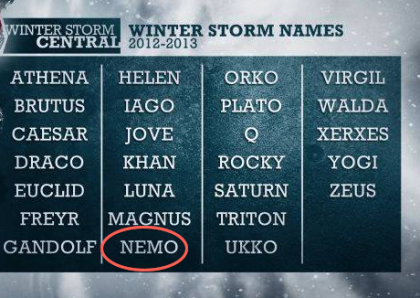 However when one digs deeper, the name "Nemo" also harkens back to another fictional character. Captain Nemo, the famous Jules Verne character from “Twenty Thousand Leagues Under the Sea,” also came up when the Weather Channel was brainstorming. “Captain Nemo was a pretty tough, fierce guy,” said Bryan Norcross, the network's meteorologist who helped conceive the storm-naming last year.

Many reporters and weather experts continue to roll their eyes at the channel’s storm-naming posture. It’s widely viewed as a marketing ploy, even though some skeptics admit that the names help raise awareness about storms.

So when you ask what's in a name, I guess the proof is in the pudding. If Nemo proves to be all bluster and no substance, then perhaps we can thank that little orange fish. But if it emerges as the Nor'easter of the century, than I think we'll be placing a lot of weight on that vengeful captain who knew when the odds were stacked against him. . . only to utter these last words: "Almighty God, enough! Enough!" Sounds a little ominous don't you think!  Might want to batten down those hatches, readers, just in case! 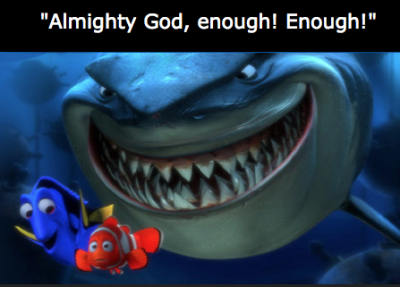 UPDATE: February 8: NEMO the Blizzard, got it's own offiial Twitter account, with over 167,000 followers (as of this posting). 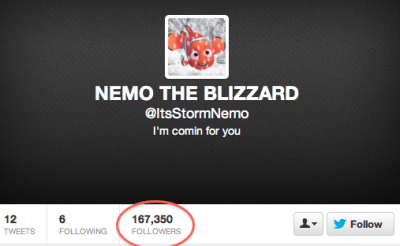 Batdog And Robin To The Rescue! The Animal Video Of The Day!!!
Comments