What The Heck Is A Goat Tower?

It is a strange sight to see towering into the air like a part of some
medieval castle got lost from the rest and with goats walking up and
down on the outside. It is something called a Goat Tower. There are only
a few in the world, but they exist as homes and exercise for certain
kinds of goats. They have become tourist attractions in their local
areas. In South Africa, the one at the Fairview Winery has become a part
of an international tourist destination. 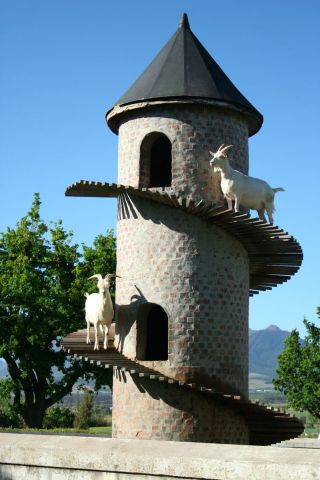 The first known goat tower, named Torres das Cabra, was built in Portugal in the 19th century as a part of a "folly" or a tower that existed purely for decoration. While it is difficult to find the reason for these towers, one could assume that it gives the goats some help with having something to do. Since goats tend to be creatures of the mountains, having something to climb up and down would appeal to their nature more than just a flat pasture.

At the Fairview Winery and Cheese Farm, the goat tower was built in 1981 and is there for the amusement of their goat herd which is a part of the cheese-making process. A farmer in Shelbyville, Illinois, saw an article about the winery and then set out to build a goat tower for his goats.  Another goat tower has been built in Waunakee, Wisconsin, it is the first such structure to have been built with a steel frame.

These structures seem to have caught the imagination of animal lovers the world over. There is even one at a bar in Memphis, Tennessee, called Silky O'Sullivan's. This last one is something of a pale copy since it is an all wood structure and does not have the little hidey-holes that the others do. This place also has the highly questionable activity of some of the patrons sharing their drinks with the goats.

To date there has never been a report of a goat falling from a tower. It probably helps if they don't allow any of those fainting goats climb them.

Owl Always Be Thankful For You