It just wasn't the sort of thing you would expect to see along the highway in Washington State. Squirrels, raccoon's, and skunks, sure, but a kangaroo? The wayward roo almost caused several accidents on Saturday as motorists were caught off guard by the sight. 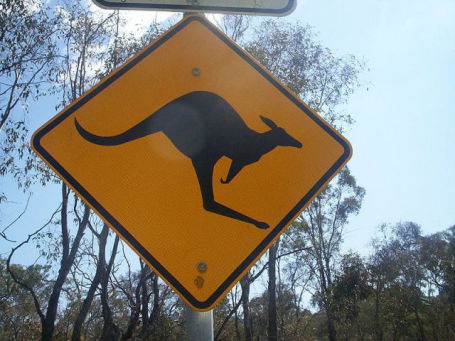 Outside of the zoo or occasional animal sanctuary you wouldn't expect anyone in the U.S. to need a kangaroo crossing sign. The police were called after the animal crossed the highway, interfering with traffic. They set up a line of police cars to keep the mischievous marsupial out of harm's way while the owner was located. The owner tracked down his pet and, with the help of friends, wrangled the animal and returned it home -- hopefully to a reinforced, maximum security pen.

The owner, a resident of Franklin county, is licensed to have exotic pets and also owns zebras. No citations or summons were issued to the owner, although official from the Fish and Wildlife did go to his property to assess what barriers were in place to keep the kangaroo from getting out again.