US Navy Seabees Vs. Coconut Rhinoceros Beetles: Who Wins?!

Sure, the coconut rhinoceros beetle is a nasty-looking bug, but no one’s more prepared to keep them from invading Hawaii than the United States Navy! Will these destructive beetles get kicked out of Hawaii before it’s too late?

The coconut rhinoceros beetle is native to India, the Philippines, and a host of Pacific Islands, where they bore large holes into palm trees, eat ugly “V” shaped holes in fronds and sometimes end up killing the trees entirely. We don’t know exactly how these pests made their way to Oahu, but if they aren’t stopped now, the local population of invasive coconut rhino beetles could quickly grow out of control.
In addition to the local government setting up hundreds of pheromone baited rhino beetle traps to lure out lonely beetles, the US Navy is hard at work destroying compromised trees and plant debris with no fewer than two trips through a series of specialized wood chippers to ensure that adults, larva and eggs are all destroyed. It seems that the efforts are worthwhile, as at least 119 adult coconut rhinoceros beetles, 250 larvae and 16 pupae have been captured. 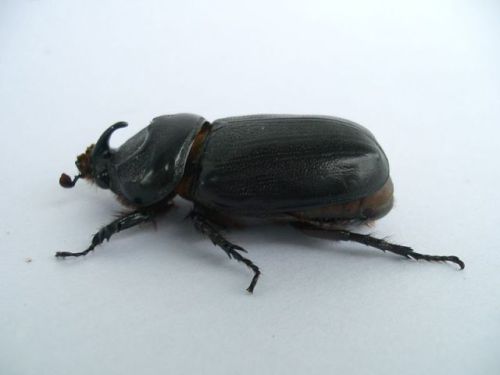 Since a female adult can lay three clutches of 40 eggs in her lifetime, it is essential to protect Oahu’s palm trees by cracking down on the rhino-faced invaders now. Even if this wave is beaten back, who knows when they’ll be back? After all, as recently as November, 2013, an adult rhino beetle was discovered at the Honolulu airport after it had tagged along in some luggage arriving from Japan…

Happy Hedgehog! The Animal Video Of The Day!!!

Ultimate High Five! The Best Pet You Could Ever Have Animal Video of the Day!!!
Comments