Some people really enjoy having exotic pets and there are many wild
animals out there that people have made into pets with varying degrees
of success. One of the more unusual choices is that of the capybara --
the world's largest rodent and native of the swamps of Venezuela. After a
trip to the South American country Melanie Typaldos was so taken with
the creatures that she went in search of how to make one part of her
family. 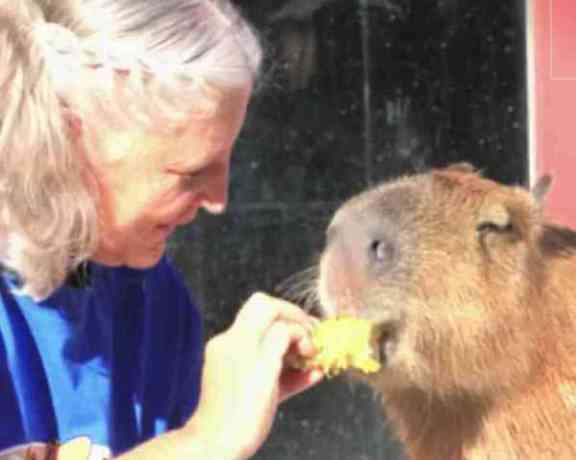 Melanie Typaldos and her Pet Capybara (You Tube Image)

After a little research Typaldos found a breeder in Arkansas, so her new little friend was not taken from the wild. Okay. Little isn't quite the word for Gary. He's 112 pounds of rodent. He was little when she first got him as a baby. Now he is about the size of a dog. 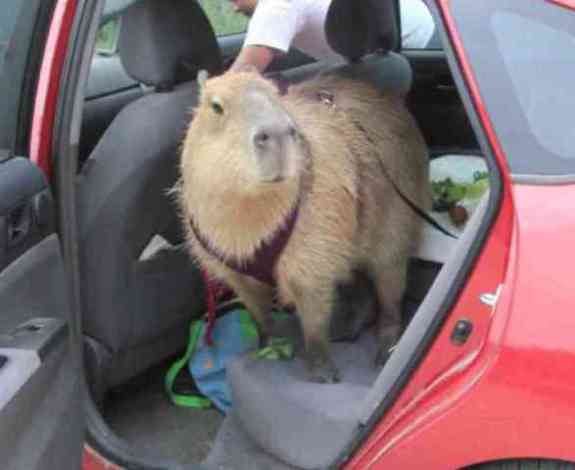 Gary is Ready for a Road Trip (You Tube Image)

Typaldos and her husband, Richard Loveman, share their Buda, Texas home with Gary and an assortment of other animals. Gary gets along well will the other animals, though he does enjoy chasing the rabbits -- just for fun, of course. Capybaras are herbivores and generally nosh on grasses, aquatic plants, fruit, and tree bark. Other animals are definitely not on the menu. He also hangs out with the family horse, dog, cat, and tortoises. 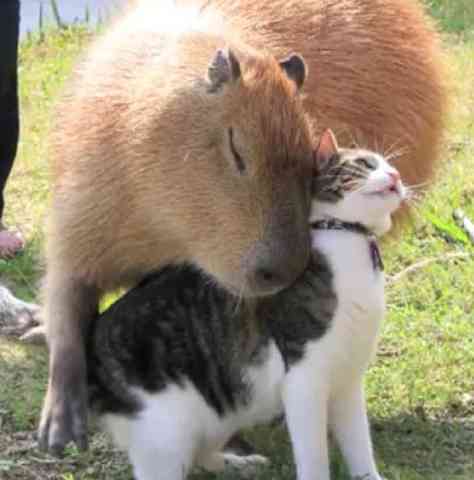 Gary and Flopsy (You Tube Image)

According to Typaldos, having Gary around is much like having a dog or cat. Not only is he housebroken, but he has also learned a range of tricks such as shaking paws, turning in a circle, and sitting up on his hind legs. He will even crawl into bed with them, though he generally prefers one of his many dog beds. He also comes when called. 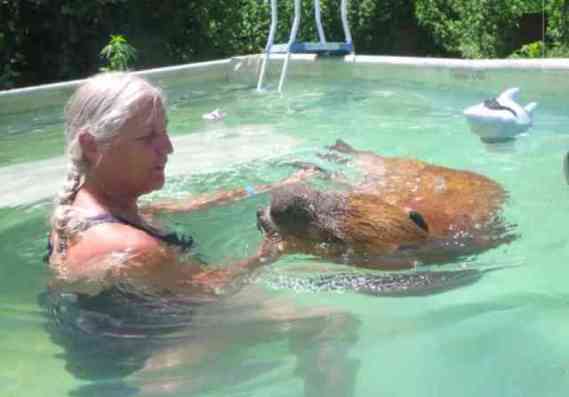 Since capybaras like to spend much of their time in the water the couple added an above ground pool to their property. He enjoys spending his time swimming and running through the sprinklers. Typaldos also takes him out to local schools to meet and educate the children.

Even in the wild capybaras are very social creatures, living in groups of up to 100. On land they can run nearly as fast as a horse. They are also completely at home in the water and can stay submerged for up to five minutes, an ability they use to avoid predators. They are preyed upon by wild cats, caimans, and anacondas. Unfortunately their meat is also popular among humans in some areas however this meat comes from farms where capybaras are raised. The giant rodent is not endangered or threatened as a species.

Typaldos loves Gary totally, but she is quick to warn that capybaras are not the right pet for everyone. While Gary is always genial, capybaras can be quite aggressive and have very sharp teeth. A bite can be serious business.

The family enjoys their pet so much that Typaldos says that she can't imagine life without him.

Was This Weasel On Back Of Woodpecker Photo-shopped?