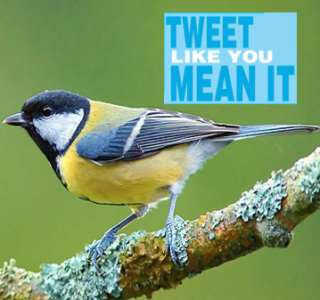 There’s now scientific evidence a tweet from a Japanese great tit might make more sense than those created by humans. Twitter’s microblogging platform gave added new meaning to our lexicon for the word ‘tweet,’ when it debuted almost a decade ago.

At the early onset, Twitter was criticized for users tweeting about what they had for breakfast, lunch and dinner, in addition to a countless number of other self-indulgent self-promotional boasts — all of which were of more interest to the sender than the

receiver. So much so, that those one-way conversations might have been the death-knell for the site had it not been for the growing majority who embraced social media based on its original intent — namely to engage with others in meaningful, two-way convos.

Recent scientific research indicates that songbirds have also learned how to communicate in a giver-receiver fashion making their tweets more meaningful than we had originally thought.

The Japanese great tit is the bird in question. It’s diverse vocal repertoire combines different calls using a syntactic rule which enables them to tweet out compound messaging to their fellow tits.

The new research is a breakthrough in understanding animal vocalizations in general where the great tit might be opening the door as to how other animals communicate. Prior to this research, it was difficult to prove that any animal was able to string together sounds to convey different nuance of meaning.

“We now have good evidence that animal communication systems share many of the basic properties of human language,” said Toshitaka Suzuki, lead author of the study and a postdoctoral fellow in the Department of Evolutionary Studies at Japan’s Graduate University for Advanced Studies. “For example, mammals and birds can use specific call types to denote specific objects, and Japanese great tits can combine different ‘words’ to send a compound message.”

Tweets with a Purpose

Suzuki’s team focused on a few of the Japanese great tits’ different vocalizations that signaled alarms, particularly when two of their main predators were approaching — namely, the jungle crows and/or the Japanese rat snakes.

The tweets studied pertained to different note types that were categorized as A, B, C and D. Prior research found that when A, B and C are produced together in that order, the call instructs listeners to “scan for danger.” And that when the “D” was added its meaning became more emphatic as it signalled: “approach the caller” but “with caution.”

To prove out their theory, Suzuki and his team played the recorded calls to 21 adult Japanese great tits in the wild, and found that the receiving birds did exactly what the calls commanded they do.

However, when the researchers reversed the order of the notes to D-ABC, the listeners did not respond. Those tweets apparently lacked comprehensible meaning for them.

Tits have it over our Closest Evolutionary Cousins . . .

“There is no evidence showing that non-human primates, even chimpanzees, use compositional syntax,” Suzuki said, adding that “combinations of sounds are very common in tits and chickadees, and are also found in other species of passerines (perching birds).”

Tweeting in the wild going forward . . .

In the future, Suzuki and his research look to learn how Japanese great tits and related species evolved such a sophisticated communication system. Then by comparison, they also hope to better determine what is unique about human verbal skills.

It could be that we are the only species that can communicate about the future and the past — this is something that has never been detected in animal communications. So keep tweeting you humans, there are a few tricks you still have up your sleeve that those great tits haven’t caught on to yet. But just give 'em time!