During work being done on the New Airport Road in Bangalore, India, a
pond terrapin was severely injured by a crowbar. The 18-year-old turtle
was rushed into treatment at a nearby wildlife shelter. In addition to a
gaping hole in his shell, his body was also seriously injured. 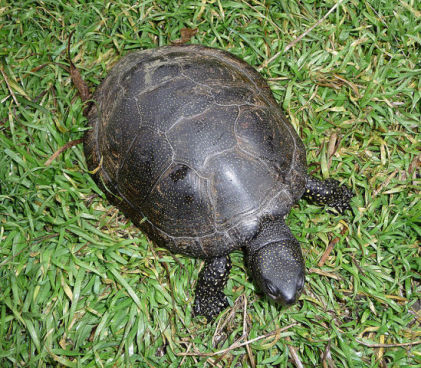 He was kept under observation for the first seven days while being treated with saline and antibiotics. Then they gave him a break for a few days before they treated his shell with an epoxy resin and fiberglass. His lungs were monitored for infection. After two months, the shell had successfully grown back.

Three months into his treatment, healing well and strengthened by an all-meat diet, they began testing the terrapin for his fitness to return to the wild. At first he struggled a bit, but soon he was swimming normally, and eventually given a clean bill of health.

Wildlife officials admit that treating an animal like this can be a risky business, but they are happy that things have turned out so well for the turtle. After an amazing four months of treatment, the turtle has been returned to his habitat.