The Process for the Utilization of Ruminant Animal Methane Emissions sometimes referred to as Patent# US 6982161, involves a device patented in 2006 that traps the belches of cows. Why, you may ask, would anyone in their right mind (or even in their wrong one) want to do that? The answer sort of relates to global warming. Will using this process save the planet? Probably not, but here’s how it works anyway. 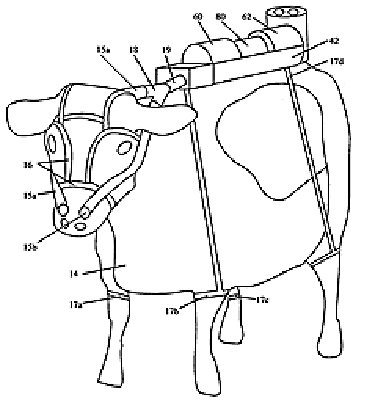 The farts and belches of cows contain methane, a notorious greenhouse gas. This specially-designed garment traps the nasty flatulence and pumps it through a “rubber diaphragm,” “plug balls,” an “outflow one-way flap sphincter” and finally into a special capsule where microorganisms consume the carbon-rich gas.

But the wonder of this invention doesn’t end there. These hungry microorganisms not only breakdown the global-warming fumes, they also serve humanity well in a glorious after life known only to a select few. These organisms can then be harvested as useful biomass. In the words of the proud inventor:

“Such biomass can be processed and sold as a nutritional foodstuff.”

In such close proximity to man, animals are often the inspiration for inventions and products. Consider Elizabeth Valeri’s piece, “Great Invention Idea? The Most Unremarkable Animal Toy Ever” and Diana Eld’s most fascinating post, “Man + Animal = "Manimals" = Eerie Portraits.”

So the next time you see a cow grazing peacefully in a pasture, show some respect. Either salute as you pass by or do your patriotic duty and…belch!