It was announced Wednesday that Thriller, the tiger that once belonged
to Michael Jackson when he lived at his Neverland Ranch, has died of
lung cancer at actress and activist Tippi Hedren's Shambala Preserve. The
13-year-old, 375 pound tiger passed away on June 11, 2012. A necropsy
was performed and the remains 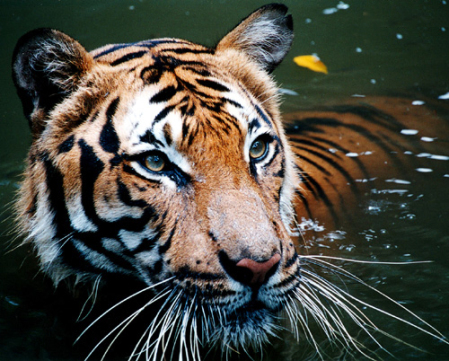 Thriller, and her brother Sabu, had lived at the Shambala Preserve since 2006, after Jackson left the Neverland Ranch for good. Hedren had built a special habitat for the two for $79,000. The tigers' home was beside the Preserve's lake and included trees and a hill. Thriller was reported to have been a happy and playful resident of the Preserve. Sabu now lives alone in the habitat, despite the fact that there are more than a dozen other tigers in residence at the preserve. There are currently no plans to change this arrangement.

Jackson, who often spoke of his love of animals, never called to check on the tigers or sent any money to help with their upkeep, according to Hedren. However, the tigers did receive $1.8 million in proceeds from the sale of Jackson's jacket from the "Thriller" video in 2011. A gift to Jackson's children of photos and other memorabilia from the tigers also went unacknowledged.

Other animals from the Neverland ranch, including giraffes, elephants, orangutans, flamingos and a variety of reptiles, were dispersed to other sanctuaries around the country.

The staff of the Shambala Preserve will hold a private memorial service once the cremated remains are returned to them. The ashes will be buried in a special area of the Preserve that is dedicated to the animals that have died there.

Cats
News Stories
Wildlife
The Fast And The Furryest -- The Animal Video Of The Day!!!

Lykoi Or 'Werewolf Cat' Makes The Grade With AKC Recognition
Sleeping With Pets: Is There Really Anything Wrong With It? The Pros And Cons