They May Swim Down Low, But They Know How To Get High

Just as Colorado becomes the first state in the union to legalize
recreational marijuana, word is spreading that dolphins also have a way
of getting high. The popular marine mammals apparently use the toxin
expelled by the 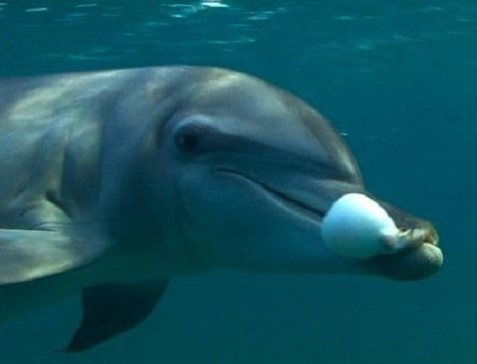 Dolphin with a Puffer Fish (You Tube Image)puffer fish to get their own version of a Rocky Mountain
high. Too bad John Denver isn't still around to write one of his songs
about it.

The behavior was finally observed by humans after marine biologists deployed a remote control camera disguised as a sea turtle. This covert surveillance operation allowed them to witness marine activity unaltered by the presence of humans or their equipment.

Biologists not only saw the dolphins ingesting the toxin, they also observed the dolphins passing the puffer fish around much like humans share a joint. The similarity in behavior is astonishing.

When provoked a puffer fish will release a deadly poison, but the dolphins seem to know own to get the fish to release just enough of the toxin to give them a really good buzz.

After using the puffer fish the dolphins appeared to enter a trance-like state. They would float just below the surface in a manner that suggested that they were enthralled with their own mirror images,

The film was shot for a new BBC nature documentary, Dolphins: A Spy in the Pod.

When Fish Take To Trees
Check Out The Images That This R/C Plane Catches In The Animal Video Of The Day!!!
Stained Glass Cat Table Lamp
Comments