Television Is Going To The Dogs With DogTV

For many decades moms have been placing kids in front of the television as an ersatz babysitter. The next thing will allow dog owners to place their pooch in front of the tube to keep them entertained with an ersatz play date. DogTV is a new channel dedicated to the canine viewing public. It is reportedly designed to relax, stimulate, or expose them to different stimuli. Your dog will be able to kick back at the end of a long day, put up his or her paws, and relax with a good chew toy while watching TV.

Are they barking mad? For nearly as long as 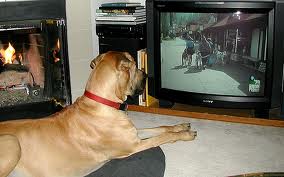 television as been around, the debate has raged over its possible negative impact on human intelligence. Will this now translate into the intelligence of dogs? Like many humans, there are quite a few dogs that don't have a lot of brain power to spare. Will the "dumbing-down of America" now be spread across species? There is also the issue of the sedentary lifestyle in frontof the TV exxacerbating weight gain across the country. Will our darling dogs go from air buds to couch spuds?

This ground has already been broken somewhat with Petsitter videos and dvds. The programming was designed to appeal to the natural instincts of cats, dogs, and birds, giving them mentally engaging and enjoyable viewing. Many have found this a great way to vary the monotony for their pets, as well as a great way to get nose smears and paw prints on the screen.

Currently, the channel is only available in the San Diego area through COX or Time Warner for about $5 a month. However, with the way many dog owners like to pamper their pooches, this is a market that is likely to expand.