One of the many side effects of the obesity epidemic in the United
States is the increasing number of people dealing with Type II diabetes.
Type I diabetics tend not to be obese, their bodies just stop producing
insulin. With 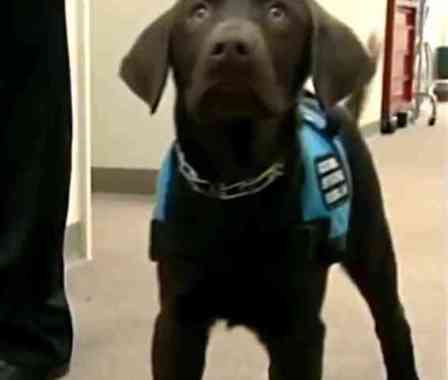 Banting, A Diabetic Alert Dog (You Tube Image) either type, the disease puts its sufferers into a
balancing act between their blood sugar being too high or too low.
Either is dangerous and must be dealt with immediately. While most
diabetics are able to detect the changes in their bodies so that they
can take action, others are not. A diabetic alert dog can notify these
people when their blood sugar is dangerously high or low.

Approximately 26 million people in the United States, both adults and
children, are diabetic. The disease is caused either by the body not
producing insulin (type I) or the insulin being produced by the
body is not being used properly by the body (type II). Either way, this
leads to abnormally high blood sugars which can lead to serious complications
and death. In the past Type I diabetes was referred to as "childhood onset" diabetes while Type II was referred to as  "adult onset" diabetes. These days, however, children as young as five are developing Type II diabetes. Being overweight is not the only factor in Type II diabetes, poor nutrition and genetics also play a role.

The opposite end of this spectrum, the blood sugar going too low (from too much insulin), can be just as dangerous, even deadly. This can occur unexpectedly and quickly.

People who are unable to easily detect when their sugar is the dangerous range, either high or low, can now have a service dog that will alert them or others to the fact. This can be especially important for parents of children with diabetes. Children may not recognize the symptoms or be able to verbalize what is happening.

The dogs apparently use their sense of smell to determine that there is a problem. Diabetics can go into ketoacidosis which creates as sort of "fruity" smell to the breath and possibly other changes in odor that the dog is able to detect sooner than diabetics may be able to detect for themselves. The dog will then alert the person by whining and licking. If the person is not responding they can be trained to alert others.

While those training the dogs and those using the dogs know that this
works, no one is sure exactly what it is the dogs are detecting.

These dogs can also be trained to bring the test kit and even emergency food or drink to the diabetic. In some cases the dog can even be trained to dial 911 in an emergency.

One in twenty Type I diabetics die when their sugars drops too low. For many diabetics having an alert dog is added peace of mind in dealing with a difficult disease.

EDITOR'S NOTE:  Article updated to clarify and correct some information in original version.