A couple of weeks ago police in Glasgow, Scotland, were called out on a
noise complaint about someone swearing loudly. When police arrived at
residence in question they were surprised to find that the offender was
Pepe, a yellow-headed Amazon parrot, whose vocabulary is a bit shocking. 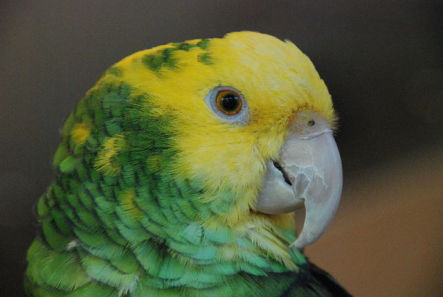 The bird had previously lived in a taxi dispatch office and it was there that he had learned to speak. In addition to his more colorful turns of phrase, he also will call out directions to taxi drivers periodically. The move from the office into the home of John McAlinden has been a stressful one for the bird. He is missing feathers from his legs and belly, presumably from nervous grooming.

A friend of the family had given the bird to McAlinden to keep him company along with his three other birds, two budgies and a dwarf macaw.

McAlinden is embarrassed by the notoriety that his pet has caused, and any distress it may have cause the neighbors. He hopes that the bird will soon settle into his new digs and not feel the need to be quite so vocal. He also hopes that some drops that he got from the vet will also help to abate Pepe's need to swear so loudly.

The police officers were very amused by the call, citing it as the best of the week. They gave McAlinden a bit of advice and no further action was taken. Perhaps they just couldn't see themselves wrangling the bird into handcuffs and taking him down to the station.  It's not the sort of thing the other guys are gonna let you live down.

The Spectre Of Lunches Yet To Come
PetsLady's Pick: Adorable Mr. And Mrs. Owl Of The Day
Comments