Two animal figurines, each approximately 6 inches long, have been found by archaeologists in Tel Moza, a large excavation area near Jerusalem. The pieces, one a ram and the other a type of wild bovine, date back 9,000 to 9,500 years ago, at an historically significant time in human history, the Neolithic period... 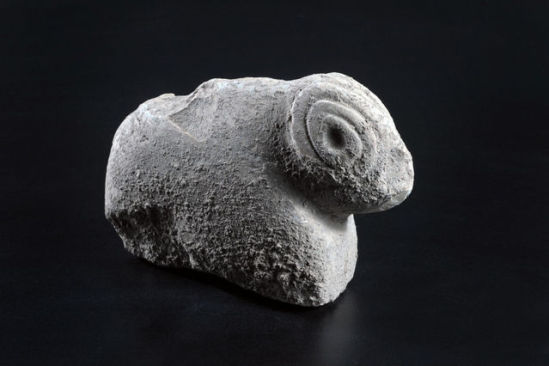 ... when humans were shifting from a period of nomadism as hunter-gatherers to a period of settlement.  At this time, permanent settlements were built with surprising sophistication.  Many artistic artifacts, like the ram and bovine figurines, recently discovered, were found near a large, round, two-story building made of fieldstone and mud brick. The ram, shown above, was carved from limestone and its sophistication shows in its correct proportions and carved-out areas of the head and horns.

The second figurine, which the experts of the Israel Antiquities Authority note is more abstract, but equally sophisticated, having horns that 'emerge from the middle of the head sideward and resembl(ing) those of a wild bovine or buffalo.'  I have not found a photo of that figurine published online.

What's most interesting is the theories posed by archeologists and historians about the significance of the animal figurines.  One theory is that they served as 'good luck charms' for the hunters - even though humans of this period were settling, they still needed to hunt for their food.

The other theory, is that once-wild animals were being domesticated and were now part of the family, which is perhaps why they are depicted so passively.