Evolution must have been tripping when it got around to introducing the mantis shrimp to life on Earth. Unlike any other crustacean, and actually dissimilar to any other species, this member of the stomatopods not only sees the world differently, it's also a creature that's known to attack first and ask questions later.

This shrimp's eyes have the most advanced optics on the planet and are totally unique in that each has 12 photoreceptors -- exceeding more than man or insect. In fact, humans and most other animals only use three color-receptors to see the spectrum of light. Photoreceptors are important for sending light signals to the brain. And while this attribute doesn't indicate that these shrimps can see every color in existence or more vividly, these receptors likely mean this particular species can distinguish between colors faster, which makes sense for an prawn that's all about speed.

More powerful than a locomotive. . .

And the eyes aren't their only defining body part. It's other distinguishing feature is its clubbed front arms, which 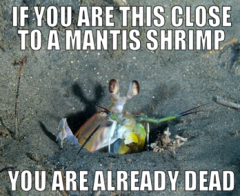 stores energy in a spring-loaded-type mechanism that, when released results in a punch comparable to Superman's. Stunning its prey with over 200 pounds of brute force, it's able to crack crab shells in a single bound. And in so doing, it actually heats up the strike zone with an instantaneous flash of light at 8500 degrees Farhenheit - just slightly cooler than the surface of the sun. WOW - now, that's one hot little critter!

This humorous YouTube vid by ZeFrank1 with over 3 million views describes the mantis shrimp as having "the fastest punch in the world, with the same acceleration as a .22-caliber bullet -- [in other words] to a mantis shrimp, kung fu looks like tai chi."

For an animal that is quick to attack, the mantis shrimp treats their mating partners much better than their foes. As a monogamous species, it's known to remain with same partner for up to 20 years. While's there's been no research as to what happens after that 20 year mark [say, divorce or 'taking a break'], during their time together, the male and female share the same burrow, bi-parent their eggs and even hunt in a collaborative manner.

But he's just a little Shrimp?

So, if this post hasn't convinced you you might not want to acquire a mantis shrimp as a pet replacement for your dog or cat -  I'm thinking that's just a very bad idea. According to the immortal words of ZeFrank1 who seems to be the harbinger of doom when it comes to mantis shrimp: "Even the octopus, who is quite a badass, can’t deal with these little psycho bastards. If your afraid of clowns, what the hell man leave [this critter] alone. If your afraid of the [mantis shrimp], stay afraid. Stay very afraid, God Damnit."

While "Shrimp" might still be in your mind, a synonym for "pint-sized," in the case of this species, it's diminutive stature really belies the fact it's super-capable of packing one helluva wallop! 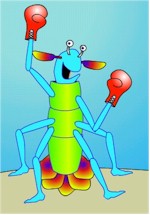 Baby Beaver Bath! The Animal Video Of The Day!!!
Comments