Starfish The Star Of Reef Decline

Severe storms aren't the only reason for the decimation of Australia's
top tourist attraction -- the Great Barrier Reef. The massive structure
has lost about half of its coral over the last 27 years and 42% of that is thanks 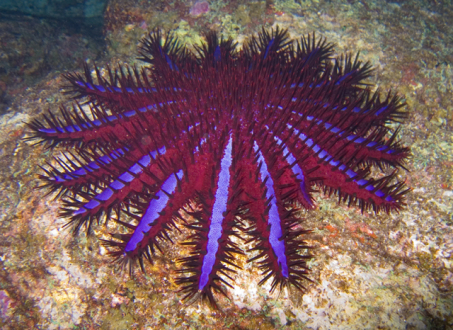 Crown of Thorns Starfish (Photo by Jon Hanson/Creative Commons via Wikimedia)to the voracious appetite of the crown of thorns starfish.
Storms are responsible for slightly more damage at 48%.

The spiny and eerily beautiful crown of thorns starfish is now being reviewed for culling to decrease their populations to allow the reef to recover. The reef could increase by approximately one percent per year

The crown of thorns starfish is named for the poisonous spines that cover the exterior. They grow up to 14 inches in diameter, and though they start life with the traditional 5 arms, they can grow to have as many as 21. Their stomach is very large in relation to the rest of their body mass. One female can lay 60 million eggs a year. 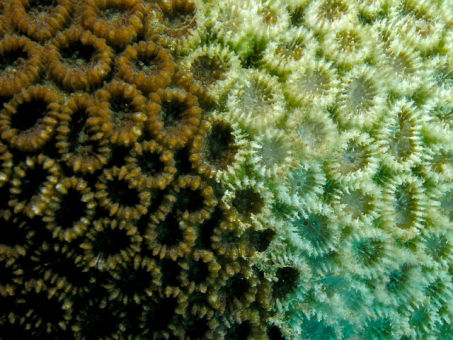 Coral Bleached or Damaged by Crown of Thorns Starfish (Photo by Nhobgood/Creative Commons via Wikimedia)Predators of the starfish include types of puffer fish, trigger fish, the triton mollusk, painted shrimp, and a type of aquatic worm. Many potential predators are put off by the spines and their toxin.

Studies of the effect of the starfish on the reef began in 1985 and have continued since. Scientists believe that limiting the use of fertilizers and pesticides along the eastern coast of Australia would improve water quality along the reef and slow the advancement of the starfish. Other ideas for mitigation of storms and starfish damage are also needed.

Tsū Network Allows For Social Giving To Animals
Trophy Hunting To Save Endangered Species Is Counterintuitive
Panda Slide! The Animal Video Of The Day!!!