Izzie was just ten months old when poachers killed her mother and
captured her to sell as a pet. The tiny monkey was kept tied up outside
the poacher's house without food or water for several days. Then the
Belize Forest Department showed up to confiscate her. It is illegal to
keep any wildlife as pets in Belize. 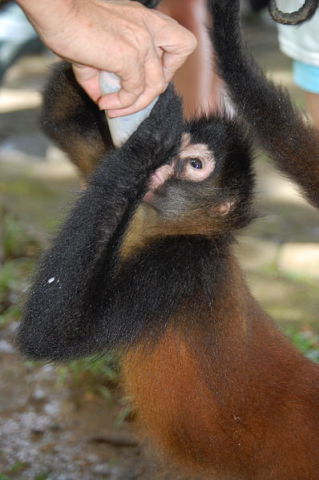 Winky the spider monkey at a wildlife rehab center in Costa Rica (Photo by Steven G. Johnson/Creative Commons via Wikimedia)

Unfortunately, Izzie is not out of the woods yet. After the Forest Department picked her up she was taken to the Wildtracks animal rehabilitation center where she is being treated for a broken arm, a dislocated shoulder, a crushed finger, and a systemic infection. The center does not possess all that it needs to be able to perform the necessary surgery to help the tiny primate to recover properly. They need the spider monkey-sized pins and screws, plates and drills, and a veterinarian with orthopedic experience to perform the surgery. The organization is hoping that someone with access to the necessary resources will come forward and donate the help to save Izzie.

For now little Izzie is getting by with a cumbersome cast that covers much of her body. In spite of this she is a happy monkey, loving her bits of apple and banana, talking with anyone who happens to walk by. While her prognosis remains bleak, they have introduced her to other spider monkeys in the hopes that she will somehow one day be able to be returned to the wild.

If you or someone you know can help Izzie, please contact Wildtracks at office@wildtracksbelize.org

5 Of The Rarest Animals In The World