A civil court proceeding began Monday in Arizona over fish pedicures
after a spa there was ordered by
cosmetology regulators to stop offering the treatments. The treatment includes using small doctor fish
to "nibble" 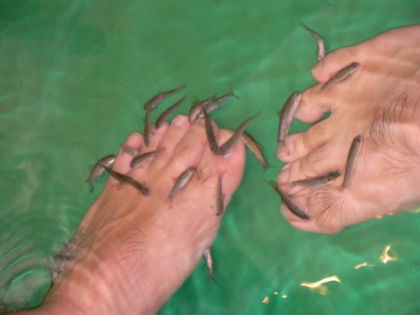 Garra Rufa, or Doctor Fish Cleaning Skin (Photo by yamada kazuyuki/Creative Commons via Wikimedia)dead skin away from a client's feet, leaving them soft and
smooth. Many areas in the United States are trying to ban the practice
as being unsafe since the fish cannot be cleaned or sterilized between
treatments.

Contrary to popular belief, the fish do not eat the dead or diseased skin. Instead it is the natural foraging action of the fish that cause the problem skin to slough away.

In some Turkish spas the fish live and breed in outdoor pools where they are used to treat psoriasis. The spas are not used to cure the condition, but to alleviate symptoms suffered by the patients. The fish themselves are native to the northern and central Middle East and are a protected species to guard against over-fishing. 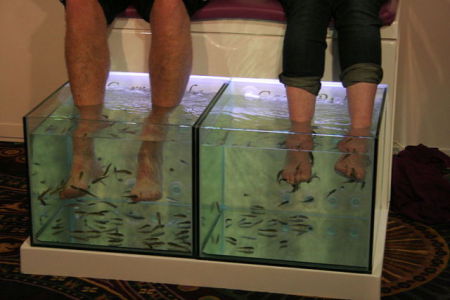 Fish Pedicure (Photo by Astrawhitetrash/Creative Commons via Wikimedia)Since 2006 fish pedicures have spread worldwide and grown in popularity. Several states and Canadian provinces have banned the practice, citing it as unsanitary by cosmetology regulators.

The spa owner in Arizona is defending the practice, saying that no one has ever suffered adverse effects to the treatment, and that she had no complaints from clients. According to her attorney, there has never been an instance of harm from a fish pedicure in the world. All claims based on health concerns are conjecture, not science. Her lawsuit is based on her constitutional right to operate a legitimate business operation having been violated. She is seeking no monetary damages.