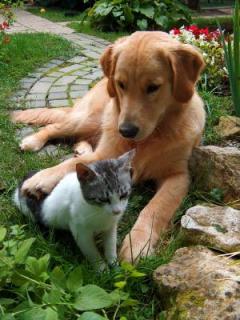 Credit: iStockphoto/Mitja Mladkovic Scientists at the Merck Research Laboratories have finally come up with a
once-a-month pill for dogs and cats.  No, it's not for birth control;
it's for fleas and ticks!  And wait until you read about the other big benefit
of the pill....

Controlling fleas and ticks has been the bane of pet owners for centuries.  You would think that by now infestations on poor cats and dogs, not to mention on humans, would be a thing of the past.  But despite all the collars, powders, sprays, and house bombs that abound for flea and tick protection, we barely manage to contain the buggers.

At the Merck Research Lab, Peter Meinke and his colleagues have developed a pill that is 100 percent effective in protecting cats and dogs against fleas and ticks for a full month.  And the other benefit of the pill is that there are no toxic side effects of the pill!

Hopefully, there is not an awful smell following them wherever they go for a few weeks either!

The scientists found the critical ingredient in the pill from a fungus that they said, "has the potential of ushering in a new era in the treatment of ecoparasitic [ticks and fleas, for example] infestations in companion animals."  Maybe the same fungus might later be used to control head lice?

There is no word yet on when the pill will be available, but I'll let you know if I sniff out any news on the subject!

Addendum: June 30, 2009  Today, the EPA reported that it is investigating the pesticides used in flea and tick medications after receiving reports of illnesses and death from pet owners.  The investigation includes the popular medication recommended by vets that is placed between the shoulders of your pet.  Please read the story on this link!

Meinke et al. Discovery of the Development Candidate
N-tert-Butyl Nodulisporamide: A Safe and Efficacious Once Monthly Oral
Agent for the Control of Fleas and Ticks on Companion Animals. Journal of Medicinal Chemistry, 2009; 52 (11): 3505 DOI: 10.1021/jm801334v, via Science Daily

5 Common Illnesses In Older Dogs You Should Know About
Comments