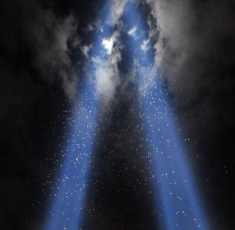 Representative, David J. Ringer of the Audubon Society tweeted what was transpiring. His rationale was based on his organization's belief that migratory songbirds had become trapped in the beams. He noted that since weather patterns had

been altered, the artificial light had attracted a large number of this species — and that this was a migratory shift, which had not occurred in NYC since 2010.

While the Audubon Society supported Ringer’s claims, they did also note that this phenomenon hasn’t been scientifically proven.

(similar to how moths are drawn to a flame). Once captivated, disoriented birds may crash into windows, or spend hours circling,” the report said.

The annual tribute is created by 7,000-watt bulbs that project four miles vertically and are visible from 60 miles away. Once detected, the Audubon members and volunteers took shifts scanning the beams and counting the birds. Every time they detected 1,000 or more birds circling they alerted the Muncipal Art Society of New York (MASNY, the organizers of the display) who immediately turned the lights off for 20 minute intervals giving the songbirds a chance to move on. 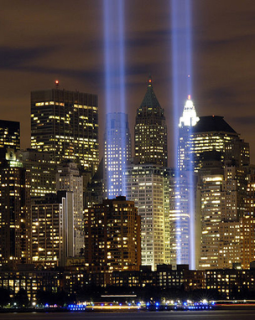 “Survivors have told me the last thing they want from this memorial, which is so meaningful and beautiful…is for there to be more deaths on this spot,” says Debra Kriensky, a conservation biologist at New York City Audubon who helps organize the monitoring.

Since science can’t explain why this happens, it seems to me that perhaps those songbirds were guided by some other cosmic force in the universe. Something that not only drew them close to honor the fallen, but also that they might have been summoned by a natural versus artificial light one day earlier. New Yorkers, tourists and TV watchers 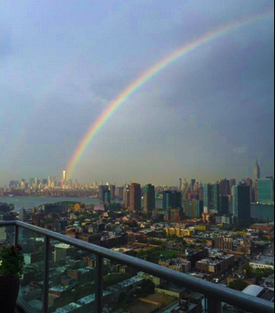 were treated to a rainbow that emerged form One World Trade Center over lower Manhattan at dusk on September 10.

Fourteen years to the day, perhaps the songbirds knew enough to wait just one more day to sing their sweet songs in honor of the departed. At least that’s what I would like to believe.