Snooty is a Florida manatee that lives in the South Florida Museum's
Parker Manatee Aquarium in Bradenton, Florida. He was born on July 21,
1948 and is currently the oldest known manatee in the world. The marine
mammal is turning 66 on Monday so this weekend the Aquarium has been
having a big birthday bash for him. He even got his own birthday "cake" made of sliced fruit and veggies. 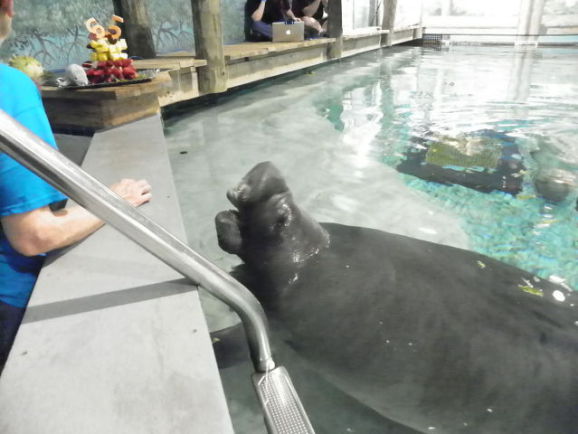 Since Snooty was hand-reared from birth he is the only manatee in the aquarium that receives regular human contact. Because of this, and his advanced age, he is not a candidate to be released into the wild.

Snooty started life when he was born to a female manatee named Lady at the Miami Aquarium and Tackle Shop. He was originally named Baby. The owner of that aquarium only had a permit to keep one manatee and had to find him a new home. That is how he ended up finding a home in Bradenton in a tank that was built especially for him. His name eventually changed to Baby Snoots, and finally Snooty. 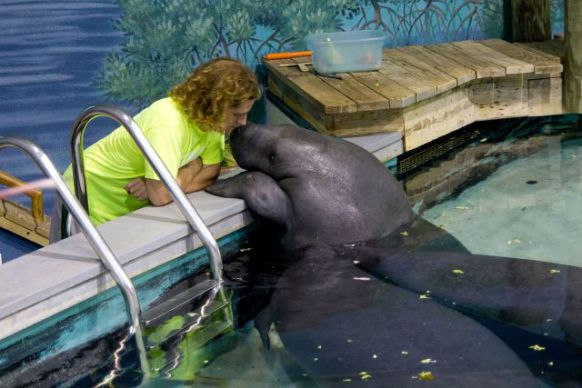 The move to his new home was not without its drama. Snooty and his former owner arrived in Bradenton late at night and were unable to contact the curator of the museum to gain entrance. Instead the sheriff and a group of prisoners hoofed it over to the museum and helped Snooty get moved in to his new digs.

Snooty's annual birthday bash is one of the major summer events in Bradenton and has become a time for family and friends to get together. The culmination of the celebration comes when the manatee gets his "cake" and the crowd sings happy birthday to him.

The manatee is definitely aware that he is the center of attention when his birthday comes around. It is also the only time of the year that he gets his two most favorite foods -- pineapple and strawberries. He apparently has quite a sweet tooth and these treats are limited to help keep him healthy.

Along with his general popularity at the museum, Snooty is the official mascot of Manatee County, Florida.

Measure Out Your Fave Recipe With Kitty Cups