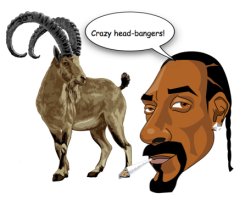 During a Jimmy Kimmel TV late show taping on June 30th, Snoop Dogg went all Jane Goodall over why ibexes butt heads. Except, instead of having studied the behavior of these magnificent animals like our favorite anthropologist did with monkeys, the rapper mistook his subjects for billy goats, rams and elks. But that's par for the course, since Snoop can't quite decide on how to describe himself either -- having labeled himself "Snoop Lion," "Doggy Dog," and "Wiggle" over the years!

Jimmy Kimmel led into this comedy sketch by noting he was "fascinated by the planet and all the creatures that crawl all over it," and then added, "that's why I've teamed up with one of the great nature lovers that I hope will fill our viewers with wonder." If that be the case, I think he accomplished his goal - because Snoop Dogg is no stranger to keeping his audience wondering.

The skit which was dubbed, "Plizzanet Earth," is a parody of the popular BBC show, "Planet Earth,"  and features the Snoop narrating clips of ibexes ramming each other. “I never understood rams,” Snoop ponders, in the clip. “Why do they do this s--t?”

While the above 1:36 minute video was described by many as the real "shizzle, drizzle." it really doesn't do justice to the actual 411 on why the ibex are often found butting their heads up against one another.

However, had the Dogg done a little research, we're sure he'd been pleasantly surprised to learn that the ibex's aggressive behavior all boils down to sex -- a topic we've been told the rapper has intimate familiarity with.

Male ibexes bump their large prominent horns together as they battle over the selection of their mating partner. This intense battle 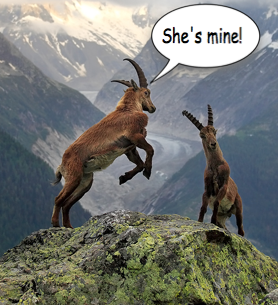 has been played out over and over again, down through the ages as both males stand on their hind legs and ram their horns against each other.

The thuds heard as they whack their heads together signals to the female that her fate will be determined by who ends the fight victoriously. It's a hard-knock life for the ibex, but a ritual that's hard-wired in their DNA - giving a whole new meaning to the belief in love at first sight!

Golden Pheasant Hits On Chick! The "I'm just not into you" Animal Video of the Day!!!!

The Swimming Animal Video of the Day!!!

The Whale Shark -- Animal Video of the Day!!!
Comments