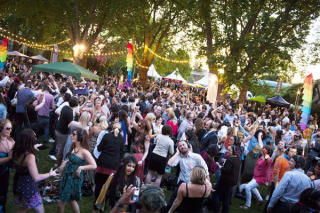 Silent Disco festival at London Zoo: ©ZSLOh, what I wouldn't give to spare my ears from the blasting base guitars of my youth.  Even the great outdoors could not absorb the sound - was it tone or noise? - that deafened me. Imagine how that amplified music (?) affects animals, most of whom have hearing mechanisms hundreds of times more sensitive than our own.

A really cool trend started in Britain a few years ago at outdoor
concerts. It's called the 'silent disco.'  Everyone at a concert hears
the same band, but through their own individual headphones.  No angry neighbors and your own volume and base control  This idea seemed a natural for fund-raising events at zoos. So far, the Denver and San Francisco Zoos have held silent discos too.

The London Zoo had several silent discos during the summer, drawing about 6,000 additional adults a week, the Zoo's marketing manager, Owen Craft, told the Wall Street Journal. And the tickets to these events brought in additional revenue for the Zoo's conservation efforts. 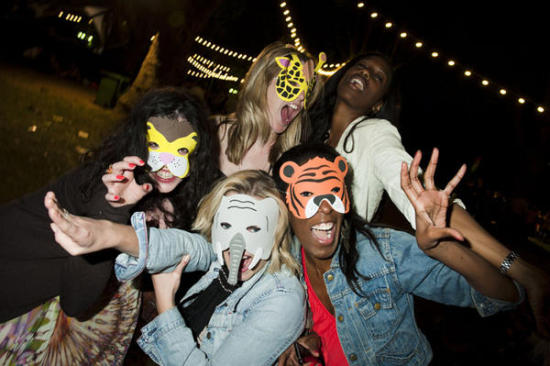 Zoo-goers are not discouraged from dressing in costume for the siilent discos, so no one is surprised by finding 'zoo animals' dancing in the crowd or walking through the animal exhibits, during evening zoo hours.Upon entering the silent disco section of the zoo, attendees are each given headsets with two channels of dance music - one of 70's disco or Motown music, and the other which played more recent music.  I'm sure the funniest moments were when people tried to dance together while listening to different music selections - a great metaphor for many other occasions in life.

Apparently, the only noise concerns of the Zoo staff came when everyone decided to sing together.  Then the organizer had to pipe an announcement into their headphones to please respect the animals' sleep.