There are just two things that Scotland's
Shetland Islands are known for -- Shetland ponies and Fair Isle
knitwear. To help promote Scottish tourism in 2013, the year of Natural
Scotland, someone decided that it 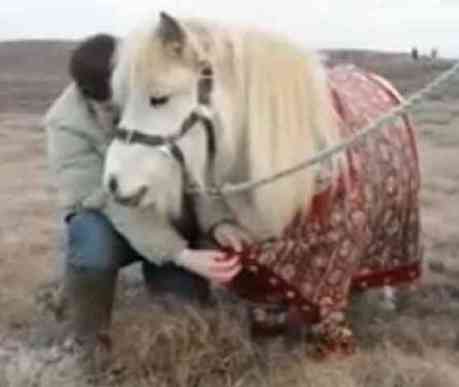 Shetland Pony Modeling The Latest In Fair Isle Knit (You Tube Image)would be a great idea to pair the two
items together to bring attention to the area. So now Victoria Beckham and Rihanna aren't the only fine fillies stepping out in Fair Isle knits these days.

The sweaters, or "jumpers" as they are called in Great Britain, were made by local designer Doreen Brown. She was just given the measurements of the ponies and away she went. The sweaters are hand knitted from the wool of Shetland sheep.

The ponies were provided by the Thorndale Shetland Driving Centre, a business that has provided ponies for the Norwegian television series "Himmelbla," and a BBC travel series with journalist Paul Murton.

The ponies didn't seem to mind the sweaters at all, but it did look like a chilly day for a photo shoot.