'Tis the season for Christmas lights, Hanukkah candles, and sea turtles
beaching in Cape Cod. The annual phenomenon has its own web of rescuers
trained to help the endangered reptiles. The rescuers have had their 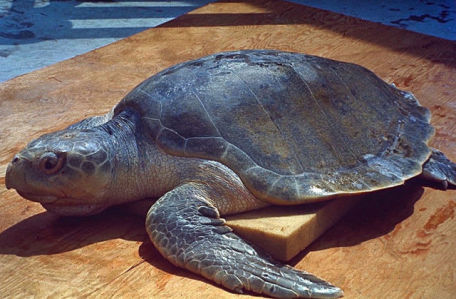 Sea Turtle (Public Domain Photo)
hands full this year as more of the turtles have washed ashore than
normal.

In a typical season between 50 and 200 turtles get washed ashore. As of last Saturday 221 turtles had been found on the beaches. The season generally runs from October to December, but has been known to run well into January. The record occurred in 1999 when 278 of the reptiles had to be rescued.  If the season continues this year this record could be challenged if not broken.

At the New England Aquarium's Animal Care Center in Quincy, Massachusetts they have run out of room several times in the last week. Nine tanks, including three that had been brought in to handle the overflow, were filled to capacity with turtles recovering from the cold. The six original tanks at the aquarium are designed to only hold 100 turtles. The crowding has reached such a point that excess turtles were flown to treatments centers in Florida by the U.S. Coast Guard.

While mass beaching happen at various locations along the Atlantic Coast, none comes close to Cape Cod in numbers. It is believed that the beaching is caused by the turtles suffering hypothermia. It is also thought that  the shape of the cape acts like a trap to gather more of the turtles than other areas.  All the turtles getting stranded are juveniles or young adults that are still learning their way around the Gulf Stream.

Volunteers search the beaches for the turtles and move them beyond the reach of high tide. Rescuers come along and pick them up for transport to the aquarium. The turtles are usually in seriously bad shape and face a long recovery. Fifty of the turtles found this year have died.

While this annual pattern may be natural and centuries old, many humans, especially the volunteers and rescuers, feel a responsibility to help in the survival of the animals as they face extinction.

Conservation
News Stories
Rescue
Turtles
Wildlife
Where The Animals Go When We Go One Degree Less Celsius
Gorillas, Endangered Gentle Giants With A Heart Of Gold