The eastern emerald elysia looks a great deal like a leaf even though
is  a sea slug found along the Atlantic coast of North America. The
strangely beautiful creature hangs out in shallow pools feeding on
algae. Like 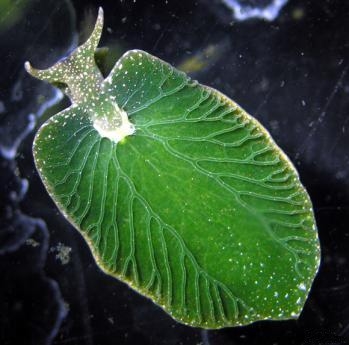 Eastern Emerald Elysia (Photo by EOL Learning and Education Group/Creative Commons via Wikimedia)plants it uses photosynthesis to create energy, blurring the
lines between the plant and animal kingdoms.

The resemblance to a
leaf is not coincidence. The slug uses the leaf shape much in the same
way a plant does -- as a solar collector. When the slug eats algae it
takes the photosynthetic organelles called chloroplasts from the algae cells and incorporates them into its own cells. This allows the slug to gather sustenance from the sun. Not only that, once so fed from the algae, the tiny creature's own physiology iappears to have the genetic capability to then be able to keep processing the chloroplasts in continuously and sustainably.

When algae is available, the slug will feed readily, if not voraciously. When it is in short supply, the slug gathers energy through photosynthesis. With plenty of light frequent feeding is not necessary. In fact the slug doesn't need to eat for the rest of its life. It just needs to do a little sunbathing.

According to invertebrate zoologist John Zardus of The Citadel in Charleston, South Carolina, the slug could actually be some sort of a plant-animal fusion -- the only known one. How cool is that?

Creatures
News Stories
Weird, Odd or Bizarre
Wildlife
They Wouldn't Be Extinct If They Had Trained This Hard -- The Animal Video Of The Day!!!

Service Dogs and Situation Training at Airport in Tampa, Florida