The Sea is Calling at Osaka's Artistic Payphone Aquariums 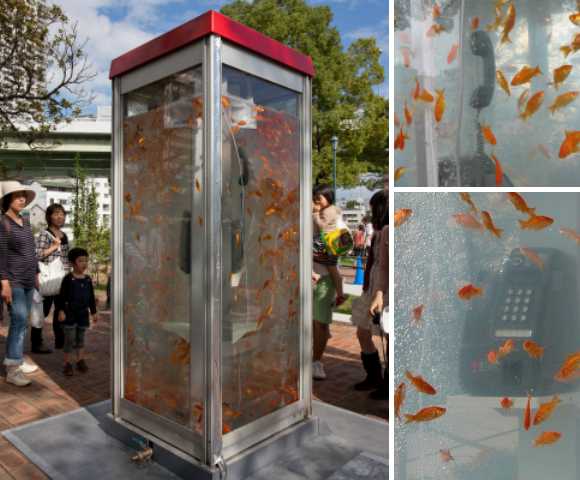 Got change for a fin? A Japanese five-member art collective calling themselves Kingyobu (“Goldfish Club”) has been installing goldfish tank phone booths in urban Osaka, cleverly
recycling these obsolete telecommunication relics while beautifying the
streets of Japan's second-largest city. Kingyobu debuted their flashy, fishy phone booths at an art festival in late 2011 and noted that not only was the concept well-received, it was also practical enough to be reenacted as public, low-maintenance, low-cost artwork.

As in most modern cities, the popularity of mobile phones has led to the rapid obsolescence and subsequent abandonment of urban payphone booths. The shift has occurred so quickly, city authorities and/or payphone operators have barely begun the process of dismantling the once-ubiquitous booths. The phenomenon offered a unique opportunity to Kingyobu, who figure in this case it's better to upcycle than to recycle. 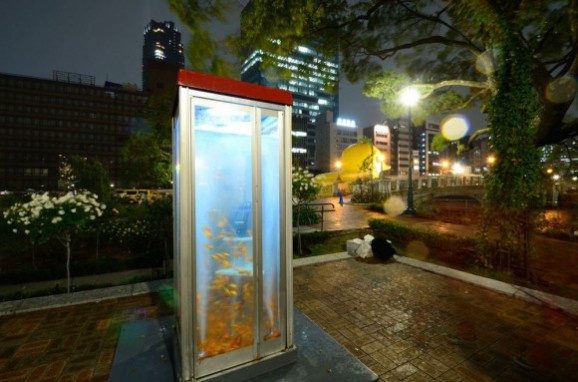 In early 2012, the first abandoned Osaka phone booth received an extreme makeover, Kingyobu-style. The booth (including the door) was sealed, filled with water, stocked with goldfish and fitted with a combination filter/oxygenator to keep the fish thriving. Lighting was installed so unwary urbanites eager to get out of the rain wouldn't find themselves even wetter.

A number of these “telecommuniquariums” now dot the streets of Osaka, each one stripped of identifying signs and logos though their original equipment telephones remain in place like, er, fish out of water. We'll assume Kingyobu members stop by from time to time, ensuring the filters are running and providing food for the goldfish. One wonders what Osaka's alley cats think of the installations, though like human onlookers it's safe to say they're both bewildered and bemused. (via Spoon & Tamago)

Get A Good Night's Sleep Without Wrestling With Your Pets! The Pet's Bedside Bunk Bed
Digital Food Bowls Help You Keep Track Of Your Pet's Food Intake
It's A Must Have! The SitStayGo "CompLeash" 4-In-1 Dog Leash (w/video)