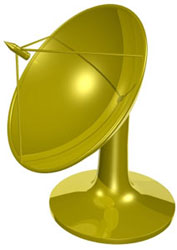 Birds can be wonderful pets. Members of the parrot family are
especially friendly, charming, and funny. But they tend to scream.
They scream when they sense danger, something new in their environment, or just
to get your attention. The sound indeed gets your attention, but it's not a
sound that engenders affection toward your bird, even among the best bird parents.

There's a new product coming out called Hush-A-Bird that looks like a
mini-model of a satellite dish. Similar technology. Both use
parabolic microphone technology to focus sound waves. In the case of
Hush-a-Bird, which you can perch on the cage or hang from the ceiling, the dish
picks up sound waves and directs them back down to the floor several decibels
lower.

No information yet on when the Hush-A-Bird will debut, but think about it in
the meantime. It will sell in two sizes, one for smaller screamers.
Apparently, the parabolic technology is especially effective for the little
guys.

In the meantime, I read an interesting blog about
a woman who taught her parrot to quiet down by whispering to her. You might
enjoy it.