The whole concept brings up images of the planet Tatooine in the Star
Wars movie franchise where the only moisture on the planet is farmed
through machines called "vaporators." The Namib Desert Beetle has
developed a natural mechanism for condensing water vapor from the air in
the desert to be able to survive life 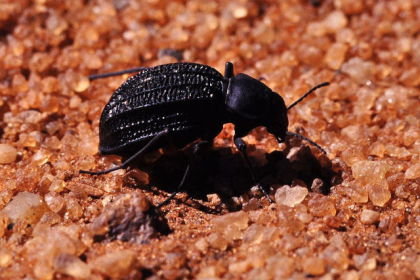 Namib Desert Beetle (Photo by Schnobby/Creative Commons via Wikimedia) in one of the driest places on
earth. Now science is learning how it does it so that we can do the
same.

Each morning this little beetle makes its way up a sand dune, positions itself into the wind, and collected and drinks up to 12% of its body weight in the water it collects. The key lies in the bumps on the beetle's back. The tops of these bumps help draw in the moisture, while the sides of the bumps are moisture resistant. Between the two water collects on the beetle's back and is then channeled forward into its mouth.

Companies like NDB Nanotechnologies are looking at how the beetle collects moisture from the atmosphere to develop nanotechnology that would allow humans to harvest water vapor.

Another system that has been developed based on the Namib Desert beetle is an irrigation system that consists of pipes that take in and cool air at plant roots to create condensation. Technology like this can help solve the world's water crisis.

Other companies are also turning to nature to create solutions for our problems.

Let A Ladybug Join You For Tea
Comments