If there is one main animal icon of Halloween it is the black cat. It is
the familiar of witches everywhere. In American popular culture there
is one black cat that is more famous than all others it is Salem
Saberhagen from the television show Sabrina, the Teenage Witch. And --
boy! -- is he familiar with his witches. In fact, he tended to get all
the best lines and delivered them with skill. 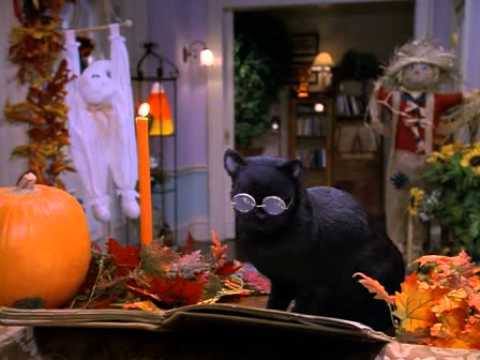 The thing about Salem is that he was once a witch himself. There are several back stories of how he ended up forced to live in cat form. For the television show it was because he had tried to take over the mortal world. He ended up as a part of the Spellman witches because Hilda Spellman had been one of his minions, "on the refreshments committee." For his crimes he was sentenced to being a cat for 100 years. Hilda's punishment was to keep him worm-free for that same 100 years. 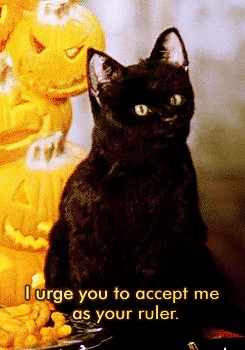 In the comic books he actually started out as a ginger cat with limited magical powers. In the television show he had no magical powers, other than the power of speech. It was that power that he used to great effect and rode his quips and one-liners straight to stardom.

While Salem was really a bionic cat (voiced by Nick Bakay), he had a number of stunt cats to take on the more physical scenes during the show's run from 1996 to 2003. He was the comic foil for the three witches he lived with in Massachusetts and continued his grabs for power, money, and food -- not to mention becoming human again. Without a doubt, many of the best lines in the show were written for the cat. He, or his bad advice to Sabrina, was also often the catalyst for the mayhem. 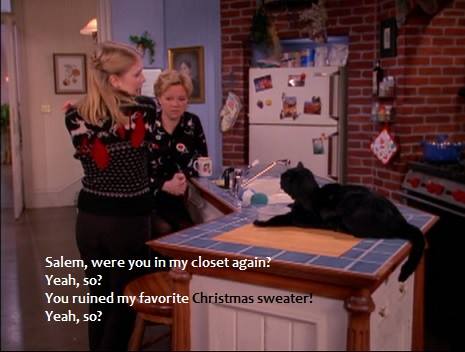 Salem and Two of his Witches (Image via Facebook)

While many of his lines were hysterical just because it was a cat saying them, others were pure gold in their own right. When told to guard the door Salem coolly replied, "Dogs guard. Cats watch  . . . and judge." On the concept of Christmas trees, "First you kill a tree and then you humiliate it." He also gives wise culinary advice, "Cheetos should be served at room temperature, you know."

Despite his inherent need for naughty and his sharp wit, Salem is a well-loved character on the show even though it ended more than a decade ago. He took home a Kid's Choice Award in 1999 for Favorite Animal Star.