One of Mikki the chimpanzee’s favorite pastimes was taking snapshots of Russian cityscapes. A collection of Mikki’s pictures recently sold for about $77,000!

Years ago, Mikki was given a firsthand photography lesson from Russian conceptual artists Vitaly Komar and Alexander Melamid. They showed the ape how to operate a variety of cameras, including a Polaroid, a modern film camera and a large “old school” tripod-mounted camera. 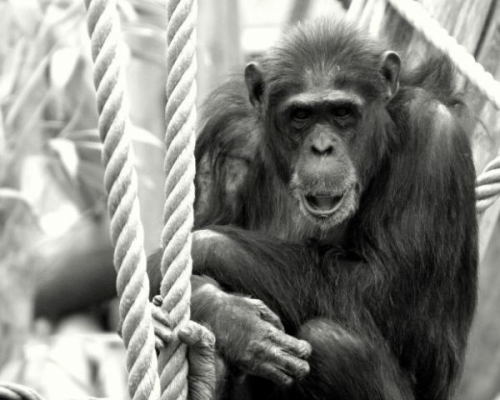 The most common theme in Mikki’s photographic portfolio are fuzzy snapshots of Russian architecture that are tilted in odd angles. The duo of artists expected to receive up to $100,000 for the "Our Moscow Through the Eyes of Mikki" series of chimp-made pictures, as well as a few behind the scenes images of Mikki’s initial photography lessons.

Mikki was discovered as a performer in a Moscow circus and became an amateur photographer in 1998, but sadly the chimpanzee won’t see any of the money that he earned from his art, as he passed on in 2007.

Chimpanzees are an endangered species of ape native to central Africa’s rainforests. The highly intelligent primates live in large family groups called a troop, where they maintain a complex social hierarchy. Chimps consume a varied diet consisting of fruit, seeds, nuts, insects, leaves and occasionally meat. The main threats that wild chimpanzees face are poachers looking to sell the apes for bush meat or as pets. While young chimpanzees are admittedly adorable, they quickly grow up to be belligerent, unruly and dangerous adults that are extremely difficult to handle as “pets.”