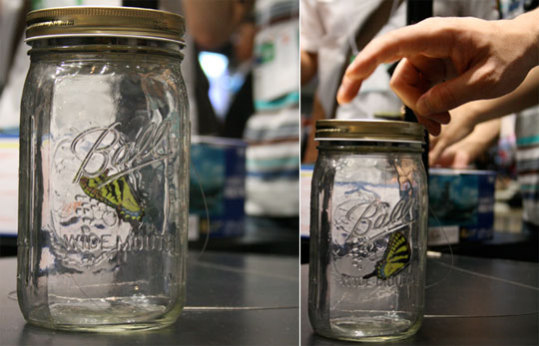 "Surprisingly realistic" is how one reviewer describes this winged wonder but words just aren't sufficient. Check out this video to see the ChouChou Electric Butterfly in concert, er, in action:

As the video shows, the ChouChou Electric Butterfly flutters and flaps in response to vibrations, just like the butterflies and moths you used to catch with nets and imprison in jars when you were young and cruel. 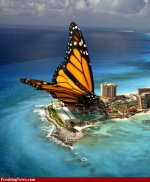 Now that you've matured and acquired a modicum of sensitivity, you can appreciate the beauty of a butterfly in a jar without the inevitable disappointment entailed when said creature gives up the ghost. Yes indeed, the ChouChou Electric Butterfly lives as long as the three AA batteries that power it do.

Best of all, this cybernetic Swallowtail harbors no resentment of humanity: this mini-Terminator is no exterminator. See the ChouChou Electric Butterfly at the 2010 Tokyo Toy Show or buy one of your own (it costs about $75) when it goes on sale this September 1st. (via OhGizmo and Japan Trend Shop, giant Monarch image via FreakingNews)

Butterflies
Gadgets and Electronics
News Stories
Pet Toys
Weird, Odd or Bizarre
Take A World Of Animals Back To School