A pensioner in Stockport,
Greater Manchester, England, was fed up with a squirrel noshing on the
food he was putting out for the birds. So he decided to deal with the
problem with his own brand of vigilante justice. He set 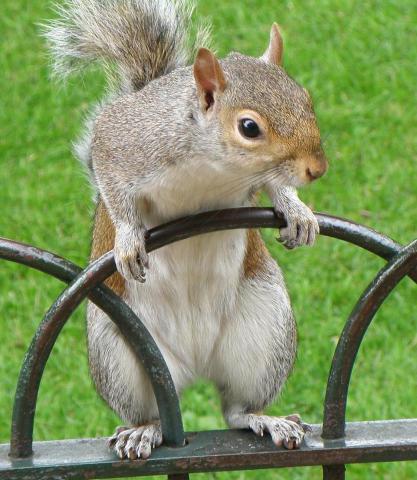 Grey Squirrel in England (Photo by KGGucwa/Creative Commons via Wikimedia)up a trap and
once he had the rodent trapped in a cage, he shot it twice with his air
rifle. He figured that should do the trick.

After going shopping, Bill Worthington, 75, returned to find the squirrel still alive. So he shot the animal three more times. A neighbor noticed the ailing animal in the man's garden and reported it to the Royal Society for the Prevention of Cruelty to Animals (RSPCA). They came and collected the animal. In spite of being shot five times it was still alive, but later had to be euthanized.

Worthington was brought up on charges for causing unnecessary suffering to the squirrel.  He pleaded guilty but claimed that he had been provoked by the squirrels, which he referred to as "garden rats" and "vermin." He also admitted that he did not care about the suffering of the animal, and found it laughable that the RSPCA was taking him to court over one little squirrel. All he wanted was a nice garden and a place to feed the birds without the squirrels taking all of the food.

The squirrel was a grey squirrel, an invasive species from North America that was introduced into the United Kingdom during the 19th and 20th centuries. Grey squirrels are protected by law and may only be killed by a local authority or a professional exterminator.

Worthington was released on bail. He will be sentenced next month. He faces six months in jail or a £5,000 fine.

iFetch Has A Brand New Puzzle Toy For Your Dog: The Award-Winning iDig (w/ video)