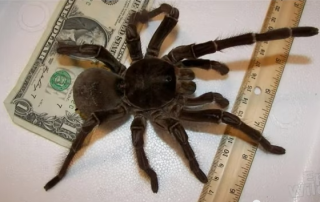 Their leg span reaches nearly a foot and they weigh almost 6 ounces. That’s the size of a young puppy. Their tips and claws make a thundering sound when they walk, not unlike a horse’s hooves hitting the the trail, and the barbed bristles that cover its abdomen can injure potential attackers.

Is it a mammal, a bird or fish? No, in actually, it belongs to the arachnid family of spiders, some refer to as tarantulas. Except this beefy hombre goes by the name of the ‘South American Goliath Birdeater.’

Piotr Naskrecki, an entomologist and photographer at Harvard University's Museum of Comparative Zoology

Piotr Naskreckiliterally stumbled over one on a nighttime stroll in a Guyana rainforest. When he turned on his flashlight, he expected to see a possum or a rat — and was taken back when he realized what was staring back at him was an enormous, puppy-size spider.

Technically known as Theraphosa blondi, the colossal arachnid is the world's largest spider, according to Guinness World Records. Its leg span can reach up to 30 centimeters, or about the size of "a child's forearm," with a body the size of "a large fist," Naskrecki told Live Science.

Its prickly belly hairs aren't ‘spidey’s’ only line of defense either — it also sports a pair of 2-inch-long (5 centimeters) fangs. However, while the spider's bite is venomous, it's not deadly to humans. "But it would still be extremely painful, like driving a nail through your hand," Naskrecki warned.

Despite its name, the birdeater doesn't usually eat birds. -- even though the name was given to it by  a Victorian era explorer who had witnessed one of these goliath spiders devouring a hummingbird. In actuality, though, they don't have any special hunting techniques, like building webs or pouncing on their prey from afar.

Instead, “they will essentially attack anything that they encounter," Naskrecki said. Their diet consists mainly of insects, earthworms and other invertebrates, but has been known to mix it up some with rodents, frogs and lizards.

They mature in 3 to 4 years and females have an average life span of 15 to 25 years as opposed to their male counterparts who only live three to six years.

Although huge, hairy and full of attitude, their populations are jeopardized due to habitat destruction of the rainforests.

And while that venom isn’t deadly, according to one report, hapless victims have been 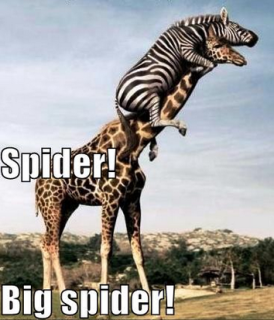 known to die from cardiac arrests just at the sight of a spider that big taking a bite out of them.

However that same reporter later denied this allegation stating “that last part is made up, but it sounds about like what would happen.” Me thinks he is correct - et tu, fellow arachnopobiacs?

'War Horse,' Anachronism Or Still Relevant For The Military?
Baxter the Labrador Pup Saves Child Choking From Seizure
Who's On Canine Camera?
Comments