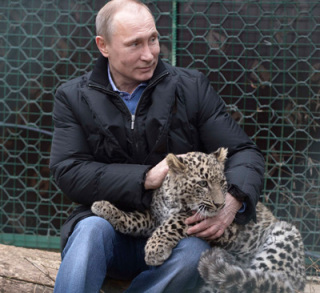 also be fond of a wide variety of animals, both domestic and wild. With mounting American and European sanctions, his hands have been slapped countless times for his overt military aggression against the Ukraine. And when The Malaysian Airlines Boeing 777 was shot down on July 17th, many of his harshest critics connected the dots to the Kremlin and accused him of an alleged mass murder.

Yet for all of his unapologetic machismo, President Vladimir Putin also wants the world to know he is a compassionate animal lover? That’s right, while the Russian president may have been a former KGB agent and an expert in martial arts with a reputation as an unforgiving leader, Putin loves to be photographed with his furry and feathered friends.

Perhaps self-serving in trying to counter all of his negative publicity, according to Burdett Loomis, a professor of political science at the University of Kansas recently told the Washington Post that while “Putin is very much at home with animals— he (also) knows they are a great for photo opportunities.” 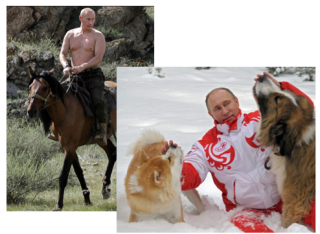 So whether caught shirtless atop of a steed, or frolicking with his dogs, Yume and Buff at his countryside residence in Novo-Ogariovo outside Moscow, Putin has been photographed with a wide assortment of animals from polar bears to dolphins.

Most recently this past week, an endangered Siberian tiger named Kuzya crossed the Russian border to China, apparently in a search of food. It was one of three tigers Putin had personally released into the wild back in May.

When the Chinese authorities realized the connection to Putin, they released a statement to China’s official Xinhua news agency that there was no need to worry about the tiger’s safety. Assuring the President and the

public at large that the tiger would experience no shortage of food, they went so far to make assurances they would “release cattle into the region to feed it,” if necessary.

Jan Kubrik, chair at the Department of Political Science at Rutgers University, believes there are a number of different ways to interpret Putin’s love of animals. One thought is that he considers himself a “father of a nation (of all creatures) -- and that he is close to nature, tough, muscular, energetic.”

Another is “he seems to be saying: ‘I love animals - so, I am not such a heartless dictator, as the Westerners tend to think I am.’”

And a a third thought is he looks at himself as a man with a heart, but that his love is manly. According to Kubrik, he interprets it as “tough love,” where he can guide animals and people, but that he can also “tame them as tough leader.”

It's also been reported that when things don’t go his way, he will most likely interpret it as a sign of weakness. In 2012, his attempt to fly a glider and lead Siberian cranes on their seasonal migration failed -- forcing the herd to turn back. From Putin’s perspective, he compared these "weak cranes" to anti-Kremlin protesters, with an inability to follow necessary orders.

At the end of day, IMHO I would like to think of the man as a true animal lover, but when one peals away the onion 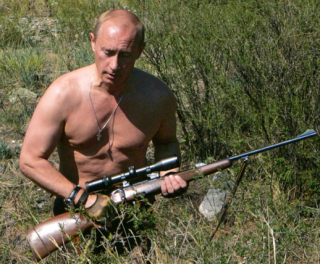 and looks a wee bit closer, this shirtless man seems to remain a hunter at heart. Your thoughts, readers?

Robot Wildlife To Snoop On Real-life Wildlife
Swan Around In Style
Would You Like To Swing With A Bear?

Change Bad Habits With The Help Of A Rabbit
Comments