On Friday the Colorado Economic Development Commission approved an estimated $14.8 million in rebates to the Pueblo Riverwalk Entertainment District to help fund, among other projects, a professional bull riding university. 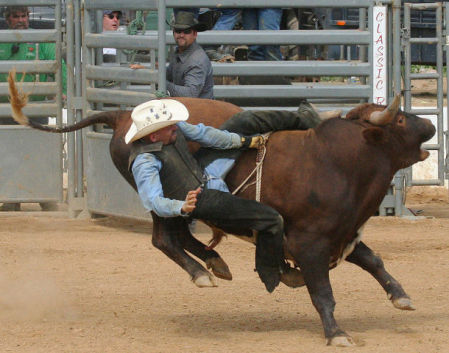 Professional Bull Riders, Inc. (PBR) is a professional bull riding organization based in Pueblo, Colorado, and has more than 800 members worldwide.

Once the PBR worldwide training facility is completed, hundreds of bull riders, judges, and bullfighters who want to compete in PBR sanctioned events would flock to Pueblo each year for the chance to improve their skills. The Commission expects that this will increase Colorado tourism as the students bring family and friends along with them, and plan extended stays to enjoy the area.

Despite the controversy against all rodeo events by such organizations as PETA, bull riding is reportedly the fastest growing sport in the world.  Bull riders attempt to stay on a bucking bull for eight seconds. The performance of both bull and rider are also judged during the event.

Bull riding is not a sport for wimps and has been called the most dangerous eight seconds in sports. Riders face the horns and hoofs of a crazed animal that can weigh more than a ton. In 2000 one PBR bull rider died of internal injuries after a competition in Albuquerque when he was trampled by the bull. Due to incidents like this, more riders are wearing protective vests, helmets, and face masks, even though they are not required, and in spite of the fact that the tradition is for cowboy hats and blue jeans.

News Stories
Cock Of The Walk, Or How Did The Chicken Cross The Sea?