Who's On Canine Camera?

Scotland's world-reknown pet photographer
Paul Walker has been perfecting his craft of pet photography since he
was a young lad growing up in the bucolic County of Yorkshire. Bordering
on illustration, much of his photography reveals a narrative akin to
the 20th Century iconic paintings of Norman Rockwell.

Paul WalkerAlways in search of capturing the optimum moment, Walker is an award winner who might spend days working his canine charges similar to how high-fashion photographers operate when filming models. And similar to that type of shoot, Walker stated in a MailOnline interview that he has "done jobs with the most well-behaved dogs and most badly-behaved, but love what I do so much it doesn't bother me."

In the above shot, these three Hungarian Vizslas are in serious pursuit of a ball caught in mid-air while their trusty Jack Russell companion watches in awe.

Here, perhaps grooming the next generation in the appreciation of the fine art of photography, Walker photographs his young son, Euan Walker with a clearly attentive Springer Spaniel called Ellie. 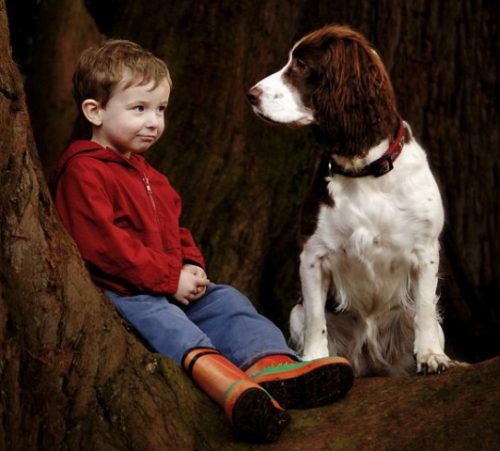 Euan Walker & Ellie
Over the years, Walker has gained the attention of Scottish television and various BBC radio programs including "Barking at the Moon," to discuss some of the craziest pet antics he has witnessed, while always in pursuit of that next perfect pet portrait.

These days, the Scottish Master Pet Photographer, aside from continuing to earn a countless number of

awards runs the "Paws Pet Photography" website and service which provides bespoke portraits. While he doesn't include pricing on the site, he does provide a menu of packages. From "Woodlawnd Paws," that pursues a dog walking through woodland trails, to the "Quirky Paws" package that provides pet owners with imagery ideas that are just "a little out of the box," Walker offers a number of packages to choose from.

In that same MailOnline interview Walker muses as to the original reason he became a photographer. He thinks it was the result of being a alone as a child. "I was an only child growing up, so I think my mother bought a lot of pets because it was cheaper than having more children," he jokes.

When questioned as to what celebrity pet he would most like to capture on film, he indicated, he's solicited Queen Elizabeth to take a snap of the Royal Corgis, but, "she wrote a very polite thank you back, (and) is yet to take up my services." Get with the program Queenie, Mr. Walker could certainly do a better job than this photo-shopped portrait? 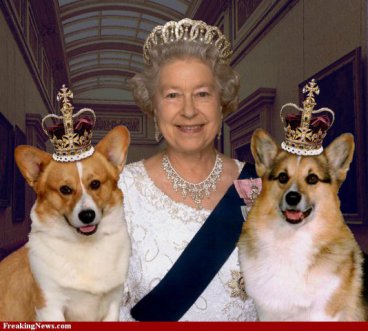