Last month Thai officials stopped 14 elephants for having fake IDs. They
weren't under age and trying to get into the hottest club or buy
alcohol. The Natural Resources and Environmental Crime Suppression team
discovered the animals were either unregistered or illegally registered
and most likely being either smuggled from neighboring Myanmar or taken
from the wild.

Nearly 100 police and wildlife officials participated in the operation after the discovery of animal identification certificates for pachyderms that were not in their registered locations. Another 69 of the fake certificates were found in the 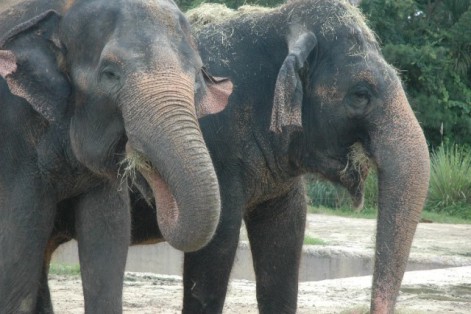 Asian Elephants (Public Domain Image)homes of two men who are now being sought.

The registration of elephants allows for them to be used for commercial
purposes. Only calves born to cows already in captivity can be
registered, however registration is not required.

Elephants are the unofficial mascot of the country and were once key to the forestry industry there.  Between deforestation by the industry and commercial development the population of the beasts has dwindled to only about 2,000 to 3,000 in the wild. About the same number are held in captivity, mostly as a part of tourist attractions.

Thailand and Myanmar are part of international agreements which make it illegal to trade in elephants across the border. Thai law also prohibits the capture of wild elephants. In the coming months more elephants with fake IDs are expected to be discovered and seized as a part of the ongoing operation. What to do with the animals is being decided on a case-by-case basis.

Loggerheads & Volunteers In The Age Of Coronavirus Pandemic